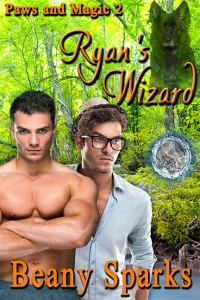 After years of no contact, Oliver “Olly” Grey was finally able to reunite with his cousin Aiden. He’s surprised to find that Aiden now has a mate—a male, shifter mate—named Lex. And it’s Lex’s pack mates that Olly is there to help save. What he hadn’t expected was Lex’s brother Ryan. Ryan Shepherd was happy to have found his brother Lex, and even happier to know that his brother was happily mated. But there is something about Aiden’s cousin Olly that Ryan doesn’t trust, especially when he also smells like the man currently holding his pack members captive. Yet that doesn’t stop Ryan from wanting to hold and comfort the man, and eventually he realizes why—Olly is his mate. Now the four of them need to plan a rescue mission, but what happens when they run into the two men that had held Lex captive and those same men come to the cabin in the middle of the night?

Ryan’s Wizard is the second book in Beany Sparks’ Paws and Magic series. This was one of the few times I started reading a series not in order. I jumped on the second one and I can say it wasn’t hard to follow the story. Still, I suggest you start on Aiden’s Shepherd, it can help you understand better the series, cause Beany created a really great paranormal world with shifters (first time I read about dog shifters), wizards and a funny Granny ghost.

I’m really curious about Lex and Aiden’s story, they’ve got a huge part in this book and I found them very likeable, in particular I loved how Aiden was protective versus his cousin, Olly. It was understandable. Olly had a really shitty past; after years dealing with abuses from his father and brother, he could finally be free and try to build a life with people who love him no matter what. He was still scared of everything and his first meeting with Ryan wasn’t easy, for Ryan too, who saw in Olly the enemy, the one who kidnapped some of his pack members and selling them as guard dogs. They both had a lot going on in their life and I appreciated the author gave depth to these characters.

I think the first part of the book dragged a little. Once Ryan realized he found his mate in Olly and the four of them starts to organized the rescue of all the shifters kidnapped, the story became more interesting. While Olly and Aiden began to working on improve their powers, Ryan and Olly needed to know how to be in a relationship.

It was an enjoyable reading with some new elements that I liked a lot, but I’d have preferred a longer version of the book, maybe just a couple more of chapters at the end. I trust to know more about these characters in the next book. I hope it will be about the fox shifter, he deserves it.

Cover designed by Latrisha Waters: I like it cause it fit the story and I totally can see Ryan and Olly in the cover models.