Our Focus is On… 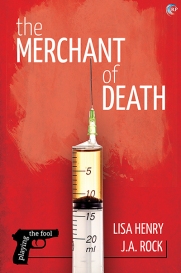 Page and McGuinness,  two of our favorites are back in another Playing the Fool novel!  For details about the story, Lisa Henry (one of our Down Under authors) and J. A. Rock are here to fill you  in.  It’s also a Barb the Zany Old Lady Highly Recommended Reads.  Find her review here!  Now onto The Merchant of Death!

Hi! We’re Lisa Henry and J.A. Rock, the authors of THE MERCHANT OF DEATH. We’re touring the web taking about our influences, our processes, anything we can think about actually, and even giving you guys a sneak peak or two! And what would a blog tour be without a contest? Check out the details at the bottom of the post to see what you can win!

One of the most fun things about Henry Page is that he is constantly coming up with crazy ideas. Or are they genius ideas? One of his ideas in THE MERCHANT OF DEATH is to create a TV and/or movie franchise based on himself and Ryan “Mac” McGuinness. It would be kind of an Odd Couple cop buddy bromance rom com crime caper. A lot like their lives, actually.

Henry’s not just relying on his “Mac and Cheese” script to pay for his private island in the Bahamas though. No, Henry’s a realist. He knows that it’s all going to come from merchandising. And while it might just start with the basics like lunchboxes and Pez dispensers, the sky’s the limit with merchandising. You can also go pretty damn low.

Yes, as low as Edward Cullen on your underpants. Actually, the scariest thing about these is probably that they sold really, really well.
You know what I really find difficult though? Sometimes when I’m baking and have to take hot things out of the oven, there’s no way to do it while at the same time expressing my love of the post-punk movement of the late 1970s. Until now:

But the ultimate in merchandising has to be these Royal Wedding condoms. One can only assume they were not authorised by the palace.
So really, there’s no crazy merchandising idea that Henry can possibly come up with that would be any more bizarre than anything that already exists in the real world. 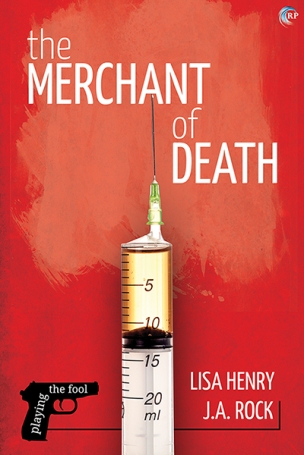 About THE MERCHANT OF DEATH:

All’s fair in love and war.

There’s something rotten in the state of Indiana. When con man Henry Page takes it upon himself to investigate the death of an elderly patient at a care facility, he does so in true Shakespearean tradition: dressed as a girl.

FBI Agent Ryan “Mac” McGuinness has more to worry about than Henry’s latest crazy idea. Someone is trying to send him a message—via a corpse with a couple of bullets in it. He needs to figure out who’s trying to set him up before he gets arrested, and he really doesn’t have time for Henry’s shenanigans. Then again, he’d probably be able to focus better if Henry didn’t look so damn distracting in a babydoll dress and a wig.

But when Mac discovers that Henry has been keeping a secret that connects the cases, he has to find a way to live on the right side of the law when he just might be in love with the wrong sort of man.

You can check out THE MERCHANT OF DEATH at Riptide.
The Giveaway: Thanks for following our tour! To celebrate our release, we’re giving away an awesome prize – an ebook copy of a novel of your choice from either of our back catalogs. We’re also giving away a $20 Riptide gift voucher, and Mac’s favorite coffee mug. What? It’s not like he’s supposed to be drinking coffee.

All you have to do is leave a comment on this post with a way for us to contact you, be it your email, your twitter, or a link to your facebook or goodreads account. Please put your email in the body of the comment, not just in email section of the comment form, because we won’t be able to see it otherwise! On February 12, 2015, we’ll draw a winner from all eligible comments! Be sure to follow the whole tour, because the more comments you leave, the more chances you have to win the prize!