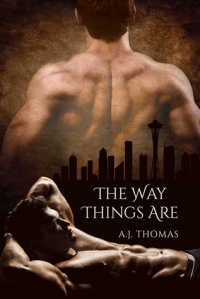 Being a single father is difficult, especially when your son’s way of expressing himself it by creating beautiful and elaborate graffiti in places that he shouldn’t. Patrick just wants a fresh start for Jay, and he hopes moving back to Washington will give Jay just that, but with graffiti being Jay’s way of expressing himself, it’s inevitable that he’ll reoffend. Patrick just never expected his new PO to be the stunning and intriguing Ken Atkins.

Through new jobs and awkward shifts, to a one-night stand that is a mistake they’re both willing to repeat, and a mysterious series of incidents at the shipping yard, Patrick and Ken have their work cut out for them if they’re going to make this relationship work in the long haul.

“You make me feel excited and safe at the same time. When I’m up there and I look down, I feel like I’m in a constant state of freefall. It’s a rush, and it’s engaging and it’s a little terrifying, but it’s also safe because I know it’s secure. Thinking about you is like that. It’s like falling all the time, but never having to worry about hitting the ground.”

In general, I thoroughly enjoyed The Way Things Are. I absolutely adored the characters and their personalities. It was truly great to see the heart and love Patrick put into raising his son, and despite some incidents in the past, the way he still made sure his son never heard ill about his ex-wife. It was something that, as a social worker who is working with families, I wish I saw more of.

There were some minor issues here and there. At one point there was a small plot inconsistency when Patrick was talking about his whereabouts the night before and in another part there was a very quick POV switch in the middle of page and then back again that confused me. Both of these things were near the end of the book, so it was a bit of a bummer to get so far and then find a couple mistakes like that.

This is also one of those books that you really should read in just a couple sittings. I had to read it in more than that, and by the time I got to read the end, a lot of my excitement was gone. It didn’t have an oomph for me like some parts in the beginning did. I will also say that they didn’t get together the way I expected them to. I’m not sure the way they first hooked up is the way I would’ve taken it, and I had to set that aside so that I could let myself continue to enjoy the book. I just felt like they deserved more than a random club hookup.

BUT, and there is a but, this book had some excellent writing for most of it and seriously memorable characters. I adored Jay and Corbin, and I’d love to see either of them get their own stories. The author did a great job of leaving it so that this could happen and setting it up, so I’m really hoping that we get to see more of them.

The cover art by Bree Archer is nice and sexy, much like the book. My only qualm is they both look pretty muscular, when I only really pictured Patrick as being that built – and the hair of who I presume to be Patrick doesn’t look red. Otherwise, it’s an enticing cover.