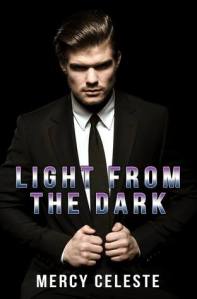 I really like Mercy’s Celeste’s work so it’s not unusual for me to expect a good story from her, but this one is the best I’ve ever read! My first thoughts upon completion: awesome, complex, convoluted plot, extremely damaged yet loveable MCs, an intriguing mystery, amazing sex, and a story that will remain with me for quite a while.

The blurb doesn’t do justice to the full scope of this story, but in a nutshell—former US Marshal Micah Beasley, tired of living with the guilt and negative thoughts of the disaster his last job took, decides to accept a job offer as bodyguard for what he assumes is a spoiled rich kid who can’t (or won’t) leave his house. Thinking it will be a cakewalk, when asked what salary he’d like, he asks for a million dollars. Imagine his shock when he gets it!

Christopher (Kit) Auberon is all that’s left of the very wealthy and powerful Auberon family. Unable to speak, scarred from spending two years in prison for the attempted murder of his uncle, white-haired from that same imprisonment, he’s also a brilliant computer gamer. Loner doesn’t begin to describe his isolated existence, however.

Unfortunately, recent break-ins at his supposedly secure estate, coupled by escalating memories of a time when he was kidnapped as a child after seeing his parents killed, are sending Kit into a place in his mind from which he may never return.

The scope of the story is so huge that I need to break it down a bit to do justice to a review. Starting with the MCs—first, Micah Beasley, blond, muscular, with a scar that slices his face on one side, former US Marine, former US Marshal, not out to his family, burdened by guilt connected to his last case when his work partner, Heath, was killed along with the child they were protecting. Heath was also his lover, and Micah feels that if they hadn’t taken fifteen minutes for a quickie before picking up the little girl, she wouldn’t have been killed, Heath wouldn’t have died, and Micah might have some semblance of a career left. Instead, his affair with his married co-worker comes out in the investigation, and Micah is relieved of duty, retired quietly, and sent on his way. Stewing over all of this for over six months, he’s shocked when his name is suggested for the bodyguard position but realizes it might be just what he needs to join the living again.

Kit Auberon was only eight years old when he was kidnapped from the scene where both his parents were murdered and their home burned to the ground. When he later wanders into a convenience store, covered in blood, he’s unable to speak and has no memory of what happened or where he’s been. And if that isn’t bad enough, we learn that he has psychotic episodes in which he shuts down completely after exhibiting violent behavior. During one of these when he was only a young teen, he attacked his uncle with scissors and nearly killed him. His uncle refused to back off and Kit was sent to a horrible mental institution for two years during which he was physically and mentally abused. When he was finally released to the custody of his grandfather’s chosen guardians, his hair had turned completely white, he had scars all over his body, and he faced a long road back to recovery. The experiences this young man went through in the past and goes through in the present in this story, are heartbreaking and tragic. This reviewer came to love him, his strength of character, his will to continue to fight his demons, his brilliance in putting his intellect to work by creating computer games and tweaking artificial voice controls in order for him to communicate with those around him. He alternates between sign language and the computerized voice, and I found myself wishing I could be there to help him in some way.

Over the course of the first week that Micah is with Kit, Micah discovers that Kit is highly intelligent, sweet and innocent in regards to relationships, definitely a virgin, impotent, and someone with whom Micah could easily fall in love. In fact, he’s one of the only people Kit trusts in his inner circle, outside of the few household staff who have been with him most of his life, and Kit begins to have feelings for Micah as well. Kit’s nickname for Micah is Beastly, not because of the scar which slashes across his face, but because of his lion-hearted strength and his rough blond good looks and hairy body. The two develop a rapport that runs much deeper than either expected, and it’s Micah who is finally able to help Kit fight his darkness and find his way back to stability when their safe environment goes to hell in a handbasket.

The mystery surrounding the childhood kidnapping is eventually revealed in all its complex twists and turns, as is the time Kit spent in the psychiatric facility, and the details of Micah’s own past with the complex situation which led to his dismissal from the department. I swear I was going to get out my spreadsheet and plot a few graphs to help me get through the cast of characters and their relationships to each other, to Kit, and to the mystery itself. At the heart of the last few chapters of the story is the deep and abiding love that Micah has developed for “Chris”, and the mutual understanding and reliance upon each other as they battle their demons and ghosts, both past and present.

I can’t begin to express how very much I enjoyed this story. It’s much more than a simple M/M romance. It’s a journey of two men’s struggles to come out of the depths of despair and fight for stability and happiness in a situation which seems virtually hopeless. I highly recommend this one to lovers of M/M romance, mystery and intrigue, and those who want to have an opportunity to stretch their imaginations to new lengths. Don’t miss this one!

~~~
Cover Art by Reece Notley is a photo of a gruff-looking man in a suit as he holds the jacket closed, showing tension in every line of his body. This is a good representation of MC Micah Beasley and the tension under which he has been living.