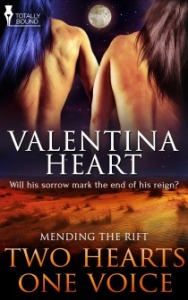 They are at war, fearing for each other, both carrying the upbringing of their children and the survival of their country. They are kings.

With the future of the throne secured, Rin and Merin still have little time to rejoice for their children or the unity of their kingdoms. Stuck in the middle of a battlefield, their lives prove to be once again at risk, Rin heads out on a long journey home with his heirs, leaving Merin to lead their army.

Rin receives his rightful title of a king from the Kari council and for once feels as if he belongs on the throne without Merin there to guide him. Missing his husband, he raises their children the best he can, but there’s no end to the war in sight and, after months of futile conflicts, Rin sees Merin cut down in battle.

Distraught and with no patience for his council, Rin threatens the Riki, making even his own men fear him.

Can Rin cope alone and still win the war, or will his sorrow mark the end of his reign?

I fell in love with Valentina Heart’s Merin and Rin in the first two stories in the Mending the Rift series.  Two kingdoms, torn by constant warfare, turn to royal marriage to stop the conflict and losses from battle.   Prince Rinin, heir to the throne of Kari Kingdom, has been demanded as a war conquest by King Merinej of Jede.  Rinin is an innocent, sheltered and lovely.  King Merin, a warrior,experienced and bold.  As part of their marriage contract, Rinin demands that Merin be faithful and in return Rinin will  provide the heir Merin needs.  And yes, this is a male pregnancy series.

The first two stories had an interesting format that brought y0u intimately into the thoughts of the main characters.  The first book is narrated by Rinin, the second by Merin and I loved that.  It was even more powerful when the traumatic events of the second story came close to shattering the characters and our hearts.  So I was thrilled to see that the last story in the trilogy was out.  How would it all end?  Who would be the narrator of this final story?

Two Hearts, One Voice by Valentina Heart brings the trilogy to a close with a tale that, while it supplies a satisfactory happy ending, is missing the impact and drama of the first two stories.  And that has to do to the manner in which it is told.  We lose the powerful single person narration to a narrative of multiple points of view and a time frame that goes from immediate events unfolding to years down the line.  Unfortunately, this change up in style brings about a loss of energy and power to the story.  Two Hearts, One Voice fluctuates between powerful scenes of battle to the intrigue of the court, and then back again.  These transitions don’t feel as smooth as they should and the momentum of Merin and Rin’s story gets lost along the way.

Another element that lessens the impact of the finale is that the power of Owner of My Heart (Mending the Rift #2) was so strong and that story so full of pain and loss, that any finale would be hard put to equal its effect upon the reader.  Plus the children grow at such a speed here that its hard to connect with any of them emotionally as we do their parents.  For those readers not fond of mpreg, other than the mention of the children and Rin’s after-childbirth body, this element takes a back-burner to the battles still going on and the mechanisms found at court.

So, while I was not completely satisfied with the story, I still found many wonderful scenes to throw my heart into.  Merin’s segments at the front, Rin’s anger and pain….that made this story sing with life and energy.  That and their love for each other that Valentina Heart made so real and gripping.  I loved their love story most of all and here they get the ending they both deserved and wanted.  I will have to be content with that.

Two Hearts, Once Voice is not a standalone story. As part of a series, the books must be read in the order they were written.  None are long and that works if you want to read them together in one sitting as I did the first two.  I recommend this series. The love story is moving, the mpreg aspect well done, and you get a HEA you want for them both.

Cover art is ok but nothing that really captures your imagination like it should.

Note: This book and series contains scenes of and references to Mpreg.

Books in the Mending the Rift series: