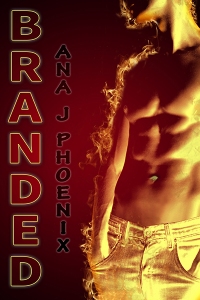 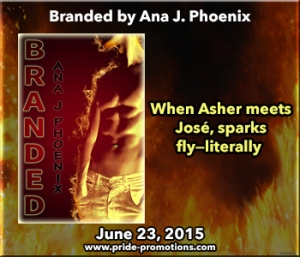 Asher doesn’t like people, and people don’t like him. He’s cool with that—all he needs from them is sex, anyway. But when he’s suddenly thrust into a strange and dangerous world filled with magical creatures, joining forces with other people may just be the only way to survive.   It’s not all bad though—in this new world, he can turn into a fire-breathing dragon! Which would be awesome if it weren’t for José, the pesky fire elf sharing his fate whose goal in life seems to be to stop Asher from ever having fun. José is hot, though and Asher wants to get into his pants just as much as he wants to get home. But José is also blind, and Asher has no clue how to charm a man without relying on his looks.   Somehow, Asher has to show José that he’s more than a sex-obsessed pyromaniac with no filter between his brain and mouth. Preferably before either of them ends up dead. Civil war rages around them, and finding the way home isn’t going to be easy. And for Asher, getting there in one piece, and with his heart intact, might just prove impossible.

The ruins of a small town stretched out before Asher. Flames were nibbling at huts here and there, but most of the buildings had already burned out, leaving nothing but black, charred and empty shells of what they might have been. Smoke still rose in the air and made Asher’s eyes water as he walked deeper into the ghost town.

He turned around to see Blind Guy catch up with him. Judging by the dirt on his clothes, he’d either run into a tree on his way or kissed the ground. A leaf stuck to his hair. Door number one, then.

“You know you wouldn’t crash into so many trees if you’d just let me burn them.”

Asher stepped closer to him. “Let me take the decoration out.” He stroked the leaf out of Blind Guy’s hair. It was a little ridiculous, but when he drew his arm back, and he was face to face with Blind Guy, close enough to kiss, his only thought was Damn, I want you to fuck me.

“What?” Blind Guy furrowed his brow.

Shit, had he said that out loud? Knowing himself, he probably had.

Ana is a writer of m/m romance and erotica. Her interest in hot guy-on-guy action was first sparked by reading scandalous Japanese mangas. A dirty secret she couldn’t resist. In a long bout of insanity – also known as her life — she decided to learn the language and escape to the land of sushi, sumo, and yaoi.

She’s since moved back to Europe to be with the love of her life – delicious European chocolate.

Enter to win a Rafflecopter Prize: $10 ARe gift card.  Must be 18 years of age or older to enter.  Link and prizes provided by the author and Pride Promotions.
Rafflecopter Code:
a Rafflecopter giveaway