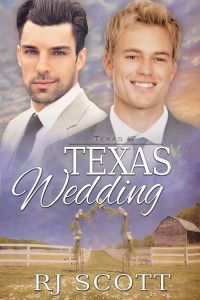 Sometimes Riley and Jack have to be the ones to fight other people’s battles and stand up for what is right.

Faced with the life changing prospect of a yes vote from SCOTUS on the issue of same sex marriage, Riley and Jack realise they have decisions to make. Add in some distressing family news and the very real possibility that old secrets may resurface, and this last book in the Texas series pulls together as many threads as the boys can manage to handle.

But through all the ups and the downs, children, family events, laughter, and tears, there is nothing as special as the forever love between these two men.

With a vote from SCOTUS, RJ Scott was able to bring her Texas series to an end with the wedding story it deserves in Texas Wedding.  And she does it in a way that is layered with elements both sweet and bluntly realistic.

Through seven books, Riley and Jack have gone from hatred to tolerance to lust to deep and abiding love.  They have been married three times.  But in only once of those ceremonies, have their hearts been engaged.  They have four children, a large extended family and a growing list of charities, one of which is based at their ranch.   Life hasn’t slowed down at all but instead the increasing hectic pace is getting to them. In Texas Wedding, RJ Scott brings all the characters we have grown to love together to celebrate the lives of Riley and Jack Campbell-Hayes, their children and to tie up loose ends.

I have always loved the realistic manner that RJ Scott folded Max, Jack and Riley’s adopted autistic child,  into the family.  Now Jack and Riley have further challenges in helping a older Max to adjust to changes in his environment and schedules, including those that happen at school.  In the story, that means that Jack and Riley need a support group, to try to “see” an issue from Max’s standpoint.  Its a wonderful side story, and  it helps to show how the future might work out for Max and his family.  No magic pills to cure Max, just support and working things through as a family.  Same goes for their daughter, Haley, who has a health crisis that is dealt with common sense and the facts.  Its hard to part with this family that I’ve grown so fond of just as the twins are getting older, Haley is starting to date, and the boy she is determined to marry is….well, let’s not go there…save  it for the book.  Let’s just say I miss them already.

All the side couples, some in flux, some not, are here.  One or two old plot threads return to be tidied up, not  neatly, life’s not like that.  But enough so, that it works here at the series end.

Jack and Riley.  Still at the heart of the series.  Still hot.  Still sexy.  And still so very in love with each other.   While their start may have been more  of a “fairytale”, the way they go out is filled with authenticity, heart and realism.  Overworked dads, (ok, extremely wealthy overworked dads) who need to make time for each other, adoption issues (Texas again), children  problems, so many things ring true for this parent, and all these elements, all the various subject matters hang on a foundation of hope. And love.  That final ceremony had me in tears.  It was the perfect ceremony to end this book and the series.  So many different things included here and all perfectly balanced with RJ Scott’s warm scripted narrative, full of heart and intelligence.

Is RJ Scott done with Jack and Riley? Maybe.  Perhaps.  At least she is for  now.

We have seven books to remind us how much we love these two men and their story and we can revisit them as much as we want.  Start at  the beginning and continue on.  It only gets better.  Meet up at Texas Wedding!  Its an ending you will treasure!   I highly recommend them all.

Cover art by Meredith Russell.  My only problem with this is that the models haven’t aged but Riley and Jack have.  Maybe they should have been put in frames or something.  It doesn’t work here.