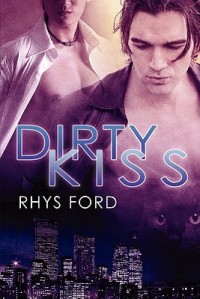 Cole Kenjiro McGinnis, ex-cop and PI, is trying to get over the shooting death of his lover when a supposedly routine investigation lands in his lap. Investigating the apparent suicide of a prominent Korean businessman’s son proves to be anything but ordinary, especially when it introduces Cole to the dead man’s handsome cousin, Kim Jae-Min.

Jae-Min’s cousin had a dirty little secret, the kind that Cole has been familiar with all his life and that Jae-Min is still hiding from his family. The investigation leads Cole from tasteful mansions to seedy lover s trysts to Dirty Kiss, the place where the rich and discreet go to indulge in desires their traditional-minded families would rather know nothing about.

It also leads Cole McGinnis into Jae-Min’s arms, and that could be a problem. The death of Jae-Min’s cousin is looking less and less like a suicide, and Jae-Min is looking more and more like a target. Cole has already lost one lover to violence he’s not about to lose Jae-Min too.

One book, one series and I’m addicted to Rhys Ford.  I admit it.  And now here is another series to die for. Starting with Dirty Kiss, I’m going to give you all another couple to fall in love with (if you haven’t already), complete with layers of Korean culture and complications that will grow on you. Along with Jae-Min and Cole, Rhys Ford enriches the story and series with a beautiful drag queen in love with a powerful Korean politician, a office secretary to end all office secretaries, a brother and his wife who Valhalla would welcome…well, not only is this a fast-paced page turner but the depth of the narrative is surprising as well.

I live in an area full of Korean influence, from churches to stores yet I learned more aspects of the culture here then I had when my daughter was friends with a girl in school years ago.  Her family disliked the idea of a non-Korean friend and stopped it after a year or so. But what I gleaned within that time at least set the framework for the facts that Ford sets down here. The rigidity, the formality, and the male favoritism, its all here but in details that enhance and add nuance to every character and scene.  From an American standpoint, its frustrating, almost alien, and we can understand it from Cole’s perspective as he strains to see it from Jae-Min’s point of view.  And others as well, considering his own mixed background that he has rejected.

With a book so full of Korean characters, characters who may not be as emotionally accessible as readers are used to, Ford does an exceptional job leaving those characters intact in their cultural isolation at times yet leaving their vulnerability just as visible as the barriers their culture raises.  Its quite a balancing act and Ford manages it every time.

There are murders, and yes, Cole’s reactions often makes me want to whap him on the back of the head ala Gibbs.  But that seems to be more in line with his character and the pain of his past history, one he still hasn’t dealt with.  So much pain floating around in this story, like hazy clouds above the characters.  As this is the first story, there is no easy anything in sight.  No relationships, no ease in pain to the past problems but maybe baby steps forward.  This is the book where the cast is being introduced, the setting is being established and the laws of the land are laid out.  What tough laws they are.  Ones to suck out your soul if you let them and they belong to a culture in another country.  Just amazing.

Did you miss this series the first time around like I did?  Catch up with it now along with me.  I am loving it, starting with book one,  Dirty Kiss (Cole McGinnis #1) by Rhys Ford.   I highly recommend it and its author, Rhys Ford.

Cover artist Anne Cain does a wonderful job with the characters and tone.  I love it.