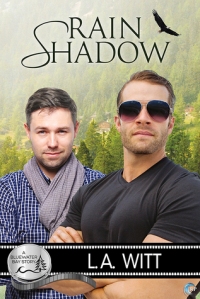 Not realizing he was gay until well into his marriage and after the birth of his two children, Jeremy Rose and his wife stayed together through multiple counseling sessions until it got to the point where Jeremy realized he was not only keeping himself from experiencing life as a gay man, he was keeping his wife from finding a love of her own.  Despite having teens who might be hurt, the two divorced, and Jeremy’s worst fears were realized—his children hated him and didn’t want him in their lives.  Not sure if he was running away or running toward a better future, he took a job as Anna Maxwell’s security guard in Bluewater Bay, Washington.

When he meets a cute older man while accompanying Anna and her lover, Leigh, to an eagle-watching expedition, he’s intrigued, but fails to get the man’s contact information.  Shocked when he later sees the man at the counseling practice Anna and Leigh attend to repair their deteriorating relationship, he decides to pursue a date, aka one-night stand, with Scott Fletcher.  Scott is also a counselor, but not the one Anna is seeing. It bothers Jeremy that Scott is a counselor because he’s never had any good experience with counseling, but it doesn’t bother him enough to keep him out of Scott’s pants and the two have their one-night stand and many more afterward.

Over time, their “fuck buddy” relationship grows and changes but neither wants to acknowledge that out loud.  They’ve gone to dinner, on picnic and weekend outings, and even to a weekend retreat at a B&B, and yet they refuse to acknowledge that they’ve become more to each other than they planned.  To add to Scott’s problems with having a relationship with Jeremy, he’s got a phobia about dating cops since his life partner, a cop, was killed twenty years before.  Between Jeremy being a “cop,” aka security guard, and Scott being a counselor, there’s not much hope of compromise for these two.

Can the two overcome these issues? Do they even want to try?  And what happens when Jeremy’s daughter backs him into a corner and blasts him with her hatred of him leaving them and living so far away? There’s quite a bit of angst involved in this story of two men who struggle with their past issues while trying to come to terms with their present attraction.

I really liked Scott who was the epitome of the older man, with salt-and-pepper hair, and a mature down-to-earth attitude.  His opinions were clearly stated, and he held his tongue when he really wanted to get in there and tell Jeremy what to do.  He was also sweetly vulnerable in his worries about something happening to Jeremy.  However, Jeremy was a different matter for me.  I liked him but I never really warmed to him as a good character.  He probably meant well but he was stubborn in his views of counselors and the benefits of counseling, and he let his kids and his ex-wife manage all their meetings and therefore all of the negative outcomes, which he then spun his wheels about over and over again.  The chemistry didn’t click for me between the two, despite how much I wanted it to.

I can’t quite put my finger on why this story fell flat for me.  It may have been that I couldn’t get into Jeremy’s character, but there was something about it that felt repetitive to others I’ve read by this author.  If you had given me an audiobook and didn’t tell me the title or the author, I would have known it was written by L.A. Witt. The style of writing, the words used, the sex scenes—I felt like I had already been there and done that.  So, overall, though I liked the story, I really can’t rate it higher than 3.5 stars.

If you like Bluewater Bay series, by all means, read this.  Otherwise, I’d only recommend it to those who like a contemporary romance between older men, one of whom spins his wheels in self-inflicted angst and makes poor choices up to the end when he finally allows the light bulb to go off so that he and his partner can work toward their HEA.

Cover Art by LC Chase depicts the two MCs: one a shorter man with salt & pepper hair and wearing a suit, the other a muscular man complete with T-shirt, jeans, leather jacket and shades over his eyes.  It’s an attractive cover and represents the MCs very well.