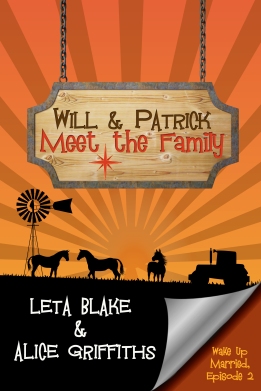 Follow Will & Patrick as they cope with the fallout from their Vegas wedding in this second installment of the romantic-comedy serial, Wake Up Married, by best-selling author Leta Blake and newcomer Alice Griffiths!

Meeting the family is challenging for every new couple. But for Will and Patrick, the awkward family moments only grow more hilarious—and painful—when they must hide the truth of their predicament from the people they care about most.

Throw in the sexual tension flaring between them, uncomfortable run ins with Will’s all-too-recent ex-boyfriend, an overprotective mobster father, and a mafia spy tailing them around Healing, South Dakota, and you’ve got a recipe for madcap laughs and surprisingly heartwarming feels.

Keying open the door to their hotel room, Will tries to fake some cheer. “Honey, I’m home! And I brought dinner!” He stops and grips the bags more firmly as his cock rushes with a sudden influx of blood.

“Just put it over there.” Patrick’s ass is in the air, his hands flat on the floor, and he’s wearing nothing but his black boxer-brief underwear. “I’ll eat it when I’m done.”

Will stares as Patrick swivels, his body moving fluidly and his legs flexing in strong, limber movements.

“What are you doing?”

“This is downward dog. And this—” Patrick moves down with careful, slow strength. “Is plank position.” The muscles in his arms, back, and thighs are like bundles of wires, and Will’s mouth goes dry, remembering clearly how they felt under his hands.

Patrick doesn’t answer. Will turns to put the food on the table, because if he keeps watching, something else is going to be hard too.

He clears his throat, glancing over his shoulder at the flexing muscles in Patrick’s back. “When we met, I wouldn’t have pegged you as a yoga kind of guy.”

Patrick grunts. He’s in a position now that Will can’t even imagine twisting himself into.

“Yoga, and meditation for that matter, are legitimate, effective, and scientifically proven means to an end: physical health and reduction of mental stress. In other words, it helps keep me sane.” Patrick moves into an upright position, sweeps his arms over his head, and brings them back to a prayerful place at his chest. “Sanity is something you could stand to try. And none of that spiritual mumbo jumbo has anything to do with it.”

“So says the guy who believes in astrology.”

Will feels heat in his cheeks. “The yoga doesn’t seem to hurt as far as keeping the rest of you in shape either.”

Patrick’s lips turn up into a smirk.

Will clears his throat, turning to the bags of food. He keeps his back to Patrick as he unpacks the takeout packages onto the small dining table. “So, do you want the gyros or the mac ‘n’ joes, because I can go either way.”

Patrick’s breath is tingly in Will’s ear and his body heat warm along Will’s back. “I go both ways too. It’s your call.” He reaches around and plucks up one of the Styrofoam boxes without looking inside.

Will swallows and gestures at the box still on the table. “This will be fine.”

He doesn’t know for sure which it is, but it will be fine, so long as his dick stops acting like a traitor and his mind stops supplying him with images of Patrick bent over, taking Will’s fingers into his tight, hot—God!

“Mmm, gyros,” Patrick murmurs from his perch on the bed. “So good.”

Will’s eyes flutter closed as he sits at the table and spreads a napkin over his crotch. No matter how good Patrick looks almost naked, they aren’t doing that again. It would be wrong. Because Will loves Ryan.

Who are you trying to convince?

He sighs and begins to eat. Mac ‘n’ joe is always tasty. Though at the moment it seems hard to choke down.

Author of the bestselling book Smoky Mountain Dreams and the fan favorite Training Season, Leta Blake’s educational and professional background is in psychology and finance, respectively. However, her passion has always been for writing. She enjoys crafting romance stories and exploring the psyches of made up people. At home in the Southern U.S., Leta works hard at achieving balance between her day job, her writing, and her family.

You can find out more about her by following her online:

A long-time reader of romance novels, Alice Griffiths finally took the plunge into writing, teaming up with best-selling author Leta Blake for the ‘Woke up Married’ serialized comedy. A lover of tropes, Alice enjoys mining old ideas and putting a fresh, funny spin on them. Formerly working in the newspaper industry, Alice is now an art curator. She lives in Sydney, Australia.

You can find out more about her by following her online:

Must be 18 years of age or older to enter.  Rafflecopter link and prizes  provided by the authors and Indigo Marketing. Enter to win 2 copies of Will & Patrick Meet the Family (Wake Up Married, Episode 2)