Buy It Here at Amazon

Scattered Thoughts and Rogue Words is happy to have Kim Fielding here today to talk about her latest short story collection and the charity that she is donating the all the proceeds of the sales of this special fantasy anthology.  Welcome, Kim, please tell us more about this collection of stories  and your connection to this charity.

Hi, I’m Kim Fielding. I’m not a doctor. I don’t even play one on TV. My healing abilities are limited to Band-Aids, ibuprofen, and Neosporin. So although I really want to help my favorite charity, Doctors Without Borders/Medecins Sans Frontiers, I can’t very well go jetting off to provide medical services to people badly in need of them.

In case you’re unfamiliar with them, DWB is a nonprofit organization that provides medical care around the world. They go to places where people are suffering from conflict, disasters, epidemics, or extreme poverty. They’re independent and politically neutral. Basically, they provide critical, life-saving services to the people who need them most. You can read more about their work here.

Several years ago, I cast about for a way to help DWB. I came up with the idea of donating all the royalties from my self-published books to them. This has amounted to several thousand dollars per year—much more than I could have managed without my readers’ support.

This year I decided to do something special as a fundraiser. I’ve gathered together three of my fantasy novellas and two short stories, then added two brand new shorts. I’ve packaged them together in one volume with a beautiful cover by Catherine Dair. And I’m donating all the royalties. The book is called The Sacrifice and Other Stories.

The novellas in this collection have already received lots of rave reviews, and I think that having everything in one volume may be handy for those who’d like to reread. Maybe some of these stories are new to you. Plus I got to write two brand-new stories that had been bouncing around in my head. One of them is about a temple slave who has the job of giving human sacrifices one last good day. The other is set in prehistoric times (I promise, no T-rexes) and tells the story of a man who must sculpt a god out of ice in order to save his tribe. I really enjoyed writing them.

The book is available in Kindle and print editions. You can indulge yourself, but it would also make a wonderful gift for your romance-reading friends. And you’ll be helping a truly deserving organization.

About The Sacrifice and Other Stories 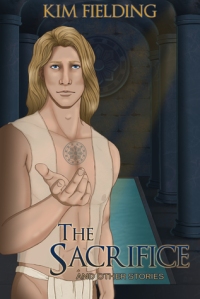 A sickly man seeks recovery in a seaside cottage.

A temple slave tends a man due to be sacrificed.

A soldier releases a genie.

In seven fantasy short stories and novellas, men find passion with other men in the most unexpected places, and even the gravest circumstances may open the door to hope and love.

This anthology includes two brand-new short stories. In “The Sacrifice,” Rylo is a temple slave tasked with comforting a man who is scheduled to be killed in the morning. In “Chasing Away Cold,” Daku builds an ice sculpture of the god Jarli in order to ensure the end of winter. The collection also includes three novellas and two additional short stories, gathered for the first time in a single volume. “Treasure” introduces Jules, a young man who travels to the quirky seaside town of Urchin Cove to regain his health—and finds an unexpected treasure washed up on the beach. Xolani, a soldier in “Three Wishes,” picks up a small glass bottle and unleashes a surprise. Another soldier, Volos in “Guarded,” will risk everything to save Prince Berhanu. In the sequel, “Mato’s Tale,” an unassuming innkeeper gets a chance for adventure. And in “The Downs,” Enitan is unjustly banished and comes to discover that the demons he must face aren’t the ones he expected.

Join Kim Fielding on journeys through imagined worlds where magic is commonplace and romance lies just around the next bend. All royalties from the sale of this book will be donated to Doctors Without Borders/Medecins Sans Frontiers.

Kim Fielding is the bestselling author of numerous m/m romance novels, novellas, and short stories. Like Kim herself, her work is eclectic, spanning genres such as contemporary, fantasy, paranormal, and historical. Her stories are set in alternate worlds, in 15th century Bosnia, in modern-day Oregon. Her heroes are hipster architect werewolves, housekeepers, maimed giants, and conflicted graduate students. They’re usually flawed, they often encounter terrible obstacles, but they always find love.

After having migrated back and forth across the western two-thirds of the United States, Kim calls the boring part of California home. She lives there with her husband, her two daughters, and her day job as a university professor, but escapes as often as possible via car, train, plane, or boat. This may explain why her characters often seem to be in transit as well. She dreams of traveling and writing full-time.

For more on Doctors Without Borders/Medecins Sans Frontiers or to donate directly to them: http://www.doctorswithoutborders.org/

Excerpt (from “Chasing Away Cold”)

She knelt, scooped a handful of snow, and stood to hold it before her. “This is nothing special—simply water that has frozen and melted and frozen again. But sometimes something very important may come from nothing at all. It depends on the heart of the maker.” She dropped the snow and pressed her hand against Daku’s chest. “The contents of a heart can change everything.”
Although he didn’t understand, he nodded. Then he gave her the cup and turned to complete the ice man.
He took particular care over the face: a narrow chin and broad cheekbones, far-set eyes with a slight downward tilt at the outside, a strong nose, and lips stretched in a wide smile. The ice man’s hair was straight, falling well below his shoulders.
“You’ve made him beautiful,” Yalamay said. Daku couldn’t say whether she’d gone and returned or had been standing there the entire time.
“He is beautiful. I only… I only tried to show that.”
Yalamay nodded as if this made perfect sense. “I knew you were the right one for this.”
Aside from Daku’s mother, people rarely praised him, and Yalamay was always sparing with her commendations. Daku should have preened under her rare words. But he was too preoccupied with what he had created. The ice man looked so real, so joyful. And in a few short hours he would be destroyed.
Daku swallowed with difficulty, but he managed a small smile when Yalamay patted his back. “Thank you for letting me do this,” he said.
“I won’t always be here, my boy. And none in the tribe but you could make Jarli so well.”
“Don’t go!” Daku cried, as if she could somehow stop death.
She chuckled. “I am pleased to be appreciated. But Daku, everything changes eventually. Winter becomes spring becomes summer becomes autumn becomes winter. Youngsters grow old and babies are born. Even hard stone is worn away”—she gestured at the rock on which the ice man stood—“but new plants grow.” She gestured toward the forest. “Someday this world will see changes that are so far beyond the tribe’s dreaming. But a few things remain unaltered. Do you know what those things are?”
“The gods?”
Her laughter startled a nearby crow from its branch. “Oh no, my boy. Gods and goddesses change too. More slowly than humans, perhaps, but no less inevitably. But the world contains magics even more powerful than gods, and the strength of those magics never changes. What are they?”
At first his mind was as blank as a fresh layer of snow. But Yalamay looked at him expectantly, and Daku remembered the conversation he’d had with his mother earlier in the day. “Love and courage.”
“Very good! There are others too, but I think those are an excellent start.”

Enter to win below.  Must be 18 years of age or older to enter.  Good luck and happy reading.  Link and prizes provided by the author.