Eddie is in love. The problem is, Eddie’s in love with four men… four men simultaneously, that is. But who does Eddie love more? And can the heart feel for that many men equally? Ah, but it does have four chambers, so four seems the most logical choice… at least, of course, to Eddie.

Paula is Eddie’s famous mom. One by one, each of his lovers comes to work for her, their lives so connected that if one of them itches, another one scratches. But who will wind up with whom in this comedic tale of life and love and friendship? In the end, it’s up to fate to decide what none of them could possibly have seen coming.

Praise for ‘Fate’:
“All the perfect kisses, love and laughter, sex and happily-ever-afters of a great romance novel, times four.” — Martha Davis, author of Dirty

“Fate asks provocative questions about the nature, and capacity, of love. A thought-provoking, tears-and-laughter gem that deserves a look!” — Rick R. Reed, award-winning author of Dinner at Home and Blink

“Don’t even try to resist diving head first into Rob Rosen’s latest novel, a witty, wonderful ride through the chaos of friendship and family. ‘Gayer than Oprah,’ as his protagonist quips, Fate is ripe with fearless joy as only Rosen can write it.” — Salome Wilde, editor of Shakespearotica: Queering the Bard

“Sensitive, touching and often uproariously funny, with a style that makes it feel like an American Notting Hill, Fate keeps you guessing and introduces a fresh, quirky set of characters.” — Riley Shepherd, author of The Last Paltry Drops and The Boy He Left Behind

“As fate would have it, Rob Rosen has written another screamingly funny novel exploring the foibles of gay romance.” — Jonathan Asche, author of Kept Men and Other Stories

Then the lights went down and the music started and…there was Jay! Wait, scrub that. THERE WAS JAY LENO! In the flesh. Sure, he was pretty far away, but on the studio monitor he was close up. Ironic, because I could’ve just stayed at home and seen the same thing. Still, here he directly addressed the audience. At home, not really, not like this. I mean he was looking, pardon the expression, straight at me! Or maybe at Trevor. Or Aunt Caroline. But definitely in our general vicinity.

“The camera adds twenty pounds to his chin,” added Grandma from behind. I laughed. Guess the apple didn’t fall too far from the tree, Ma being the Red Delicious.

After the monologue, which again was sort of drab and on the vanilla side, especially when you were accustomed to Ma, Jay sat at his desk and did some standard Jay stuff in his standard Jay nasal twang, and then the curtain parted from the side and out popped Katie.

“She’s so tiny,” Aaron said from two seats over.

Again I nodded. “All the stars are. The big ones don’t fit inside their trailers.” Everyone nodded, even the strangers in front of us.

Katie was now yammering on about some new project of hers, but I had a hard time concentrating. Ma was going to be on in less than an hour. My Ma! On the friggin’ Tonight Show! Sure, Leno was no Carson, but beggars couldn’t be choosers. Then Katie was done and there was Sean.

Again I nodded. “Madonna probably wouldn’t have married anyone too tall. Then the cameras would’ve focused on him.”

“As if,” said Brian, reverently.

Again, I had a difficult time concentrating on Sean. Ma was on next, after all. Ma was the closer. Sean Penn was Ma’s opening act. I had a feeling that statement would be repeated for years to come. Mostly by Ma.

Trevor reached over and held my hand. “I’m so nervous.”

“Ditto,” I said. “Imagine what Ma must be going through.”

Dad tapped me on the shoulder. “Ma’s been drinking since breakfast. Ma is feeling no pain whatsoever. Ma is probably talking Katie Couric’s ear off even as we speak.”

“Probably trying to land a segment on 60 Minutes or CBS Evening News,” I added, knowingly.

“Probably,” agreed my grandma. “Or asking if Matt Lauer is a prick in real life.”

And then Sean was gone and the cameras were back on Jay. Honestly, if I was breathing at the time, there were no signs of it. Despite the cool air blowing down on us, beads of sweat were trickling down my face. I squeezed Trevor’s hand. He squeezed mine in return. Brian pressed his knee to mine. Astoundingly, my dick stayed still. I suppose it was as nervous as the rest of me.

I gasped. Jay Leno just nasally shouted my mom’s name to the entire country! Or at least to a few million DVRs and VCRs.

Ma walked out smiling, sure and steady. She looked beautiful, radiant, at home. Then she started her routine. Most of it was what we’d practiced. The rest was about me. Again I gasped.

Brian leaned over and whispered in my ear, “Your closet door will never be the same.”

My mouth remained in gasp mode. “She’s blowing the fucking hinges off.”

And I realized that Ma was also outing me to my family, to our neighbors, to everyone I’d gone to high school with, everyone I went to college with. Everyone. Wait, better—or worse—still, EVERYONE! Or at least anyone who didn’t watch Letterman or Conan.

The audience laughed. I ducked down in my seat. My friends laughed. I prayed for a meteor to hit Burbank. My family raucously applauded. I planned on ways of slowly torturing Ma, starting with locking her TV on Fox News and substituting her vodka with flat Sprite.

Her three minutes, which felt more like three hours, finally came to an end. Jay ran over and gave Ma a hug. “Ladies and gentlemen, Paula Jackson!”

The audience cheered, friends and family the loudest. Me, I was in shock. Me, I was in a coma. Me, I definitely peed myself. “Should’ve bought the Depends,” I whispered, my voice drowned out by the crowd.

Said crowd began to disperse. I was frozen to the spot. “Eddie,” Trevor said, shaking my arm. “Come on, time to go backstage.”

“Backstage. To see your mom.” He said it slowly. Or perhaps that’s just the way I heard it. In fact, the whole world was going in slow motion now.

Dad hit me from behind. “Snap out of it. Your mom was amazing.”

I forced a smile. “Amazing,” I said. “Let’s go tell her how amazing she was.” Because I sure as hell was amazed. 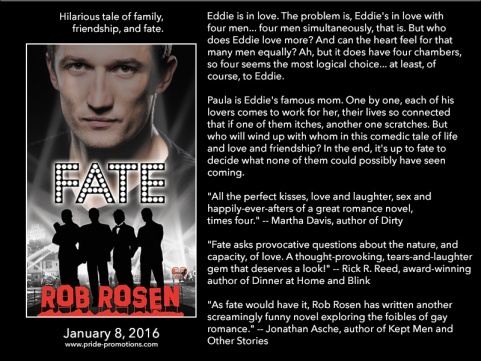 Enter to win a Rafflecopter Prize: PDF copy of ‘Fate’ by Rob Rosen.  Must be 18 years of age or older to enter.  Link and prize provided by the author and Pride Promotions.
a Rafflecopter giveaway
https://widget-prime.rafflecopter.com/launch.js