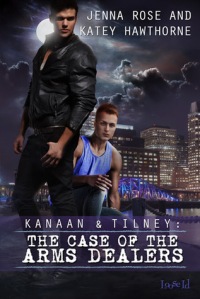 John Tilney–praeternatural pyrokinetic and mystery author–has noticed the bottom dropping out of the market for his usual gothic fare, so he goes to Lowell Kanaan, PI, for a crash course in noir. Lowell, the cranky wolf-shifter detective, isn’t sure why he agrees to let John shadow him–though it might have something to do with John’s weirdly endearing honesty… and pretty lips. John thinks he’s found the perfect detective novel hero in Lowell, but it isn’t long before he realizes he doesn’t want Lowell for his book, but for himself.

As they become entangled in a supernatural whodunnit involving the Zombie Mafia, black market body parts, and shady insurance deals, their partnership grows closer–and hotter. But when it comes down to the wire, Lowell’s wolfy protective side threatens to drive John around the bend, or at least out of the office. Good thing John’s as much sunshine as he is fire; hopefully it’s enough to help them catch a murderer before they end up in literal pieces, too.

The authors created a delightfully insane and intriguing world here, with lots of interesting new paranormal praeternatural races/creatures. They obviously put a lot of thought into their world and that definitely paid off. I loved the variety of all those exciting new creatures and the authors’ new interpretation of commonly known ones such as shifters.

The world building was pretty good, even if one of the basics was missing for me. I never could quite figure out if there were normal humans in this world too and if so, whether knew about the praeternaturals.

At times, this was utterly hilarious. I love a book that can make me laugh without making the whole plot ridiculous. Sometimes the humour was a bit too much for me, but I generally prefer darker reads, so it might just have been me.

The mystery part didn’t play that big of a role in the plot, but since I’m more a fan of fantasy than mystery, that was fine by me. Just don’t expect extensive detective work.

I also wasn’t too fond of the categorical condemnation of the BSPD, the praeternatural police force. I missed an explanation as to why they were all so incompetent and unwilling to actually help.

I also wasn’t too fond of John. Sure, his powers were pretty cool, but overall he just seemed really weird to me.

Overall, this book was okay. The world was great, but the romance was kind of disappointing. If you’re okay with insta-love and enjoy unique fantasy worlds, then I’m sure you will like this book.

The cover by Dar Albert shows Lowell and John with the skyline of a big city during the night. It fits the story and the MCs match the descriptions in the book.