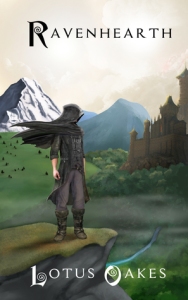 Every ten years, a letter arrives at Ravenhearth’s Abby requesting a companion for the town’s Keeper– a powerful mage that keeps the town safe from a deadly miasma. His only request is that the person comes willingly into the castle.

Ten years before, Ash touched the last letter and felt the need to learn more about it. Over the years, he did nothing more than to survive in hopes to have a chance to be the next companion. When the next letter arrives, he’s the first one to volunteer to be sent to Ravenhearth’s Keeper.

He’s a twenty-one-year-old orphan, interested in learning magic, and volunteering is his only chance to achieve his dream. He loved the town he moved in with his mother sixteen years ago, but he doesn’t have anything left holding him back. After convincing the Council about his desire to be the Keeper’s companion, they agreed, and a week later, Giles, the castle’s butler comes for him.

The rest of the story takes place at the castle and expands about a year. During this time, Ash meets several characters that would play an important role in his life. He learns more about himself and the real reasons he is drawn towards magic. And he does all this under Giles’s guidance. In the end, Ash’s dreams come true, and he gets his HEA.

Ravehearth is a novel that has the potential to be considered high fantasy if push further than its romance element. The world the author created is flexible enough to house multiple stories in its different cities. The diversity of the cast, their gifts, and their personality give this story the possibilities to being remarkable.

We get little background information about the miasma, the magic, the mimics, the clockwork, and the world itself. Enough to feel comfortable with the things happening around the MCs, but not enough to be invested in anything else than the possibilities of a relationship between Ash and Giles or Ash and the Keeper.

Ash life hasn’t been easy since the passing of his mother, but from an early age, he felt the calling to become the Keeper’s companion. We see him struggle with his decision and what he found when he arrives at the castle. He is a loving character that will steal a piece of your heart.

The limitations of Ash’s POV made connecting with the other characters difficult. The readers want him to get happiness, but we don’t have a way to know if what’s happening in the castle would be enough to fulfill Ash’s expectations. I’d had like to read Giles’s POV or perhaps to have the Keeper as an omniscient narrator.

The beginning and the end of the story moves at a steady pace, but the middle drags with nothing more than Ash’s musings and dreams. Very sexy dreams, but not enough to take the plot forward. The story line is predictable, but even so, it was engaging enough to keep reading. And the magic studies are nothing more than a footnote to the story. We get more details about plants and food that the magic lessons.

This story has great potential, but it felt short in its current incarnation.

The cover, by Kirby Crow, shows Ash looking towards the Ravenhearth castle– the miasma visible between them– matching one of the scenes in the story.