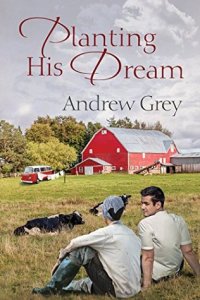 Foster dreams of getting away, but after his father’s death, he has to take over the family dairy farm. It soon becomes clear his father hasn’t been doing the best job of running it, so not only does Foster need to take over the day-to-day operations, he also needs to find new ways of bringing in revenue.

Javi has no time to dream. He and his family are migrant workers, and daily survival is a struggle, so they travel to anywhere they can get work. When they arrive in their old van, Foster arranges for Javi to help him on the farm.

To Javi’s surprise, Foster listens to his ideas and actually puts them into action. Over days that turn into weeks, they grow to like and then care for each other, but they come from two very different worlds, and they both have responsibilities to their families that neither can walk away from. Is it possible for them to discover a dream they can share? Perhaps they can plant their own and nurture it together to see it grow, if their different backgrounds don’t separate them forever.

I have enjoyed all the stories I have read by Andrew Grey and when I saw he had another story with a farm setting I definitely wanted to read it.  It really makes me want to go back and read more in the author’s other series that I haven’t gotten to yet.

Foster is working hard to get his father to see him as an equal on their family farm and after his father passes away he is left to take the reins.  Javi worked the farm with his family the previous year and Foster was drawn to him then, but when they come back when Foster is by himself he gets more of an opportunity to get to know Javi one on one when he offers to help when they arrive early for the picking season.

I quickly understood Foster and the fears he had in regards to keeping the farm afloat and making changes to make it his own.  The story is told from Foster’s point of view, but the author really helps you understand the struggle that Javi is going through wanting to have something for himself but feeling responsible for his family.  They both discover their love for the other during their short time together while it feels that most of the book is spent with them apart before and after relationship.

I really enjoyed this story and it was very sweet and even the sex scenes were more on the sweet side than being “hot”.  I just wish that more time would have been spent on how their relationship grew after Javi came back, it was just a jump ahead in time where everything is going well, but other than Javi showing up on Foster’s doorstep you don’t really get much else.

Cover art by LC Chase really gives you a visual for the setting of the book and the items that are shown are reflected accurately in the book.