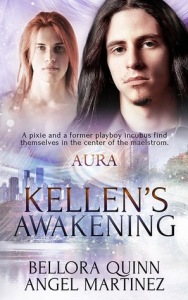 The staff at AURA has had a busy summer. Between chronic understaffing, dealing with warring goblin factions and an unusual number of hazardous Events, everyone is overworked. Sinistrus the incubus, newly hired as an AURA medic, actually enjoys his busy new life of responsible employee and faithful lover to his gorgeous police sergeant, Ness the centaur. Life would be perfect, except for a niggling suspicion about a colleague. Everyone else seems to disagree, but Sin’s certain something’s not right with that pixie.

Kellen, a pixie crossover, loves his job working in AURA medical, even if he is something of an outsider. His job and the friends he manages to make are happy spots in an otherwise dark and secretive life. As the rest of AURA tries to discover the root of the inexplicable rise in violence and large scale Events, Kellen fights to preserve his own life and what dignity he has left.

These two unlikely heroes must put their differences aside and navigate tragedy and ever-escalating disaster together in order to stop the sinister forces that hold Kellen in thrall.

The AURA series from Bellora Quinn and Angel Martinez just keeps getting better and this book is perhaps my favorite in the series.  It did it by breaking my heart and then slowly, finally putting it back together again.  But oh how the tears flowed before that happened.

In this world (what an amazing world it is) a magical, human engineered explosion has created a rift in world dimensions, causing beings to fall out of their worlds into ours, with often tragic consequences to both.  AURA was set up to handle moving these ‘otherworldly’ and often magical beings into our society with as smooth a transition as could be handled, which is saying a lot with trolls, mermaids, elf warriors  and such.  And always there is the  threat of darkness and madness looming on the edge from those seeking power or a return or an inability to deal with loss.

Its an amazing universe they built and they’ve created a cast of characters and couples/triads who are just as complicated and addicting as their stories.  Lucky for us, most of them make appearances in each succeeding book, so we get to keep up with their relationships as well.  Here we get back to Sin and Ness, happily enjoying their new love and jobs.  Sin is such a great character, a succubus who has fallen for a centaur, a great love story we followed in a previous tale.  We also meet up again with Kellen, again a secondary character brought forward to get his due.

Kellen has so many secrets but his character is one that you can’t help but love and root for immediately.  He’s wounded, complicated, and leaking pain from every pore if only they would notice.  Trouble is the whole city is full of magical pain and problems at the moment, so other things like Kellen’s are easy to bury.

The author’s writing is deeply emotional, their descriptions will tug at your heart, their scenes pulling you into the story and the conflicts arising everywhere.  And before you know it, you’ve emptied a box of tissues and reached for a second.

One note, these are not standalone novels, they build on each other like building blocks.  So go back to books one and two before picking this one up.  After finishing this one, you just might want to do that anyway because the characters will call out to you to make your reacquaintance.  How I love them all.  Now I can’t wait to see where the authors will take us  next…..

Cover art by Posh Gosh is so so.  Needs more of magic, I wish there was more of a hint of wings there as well.