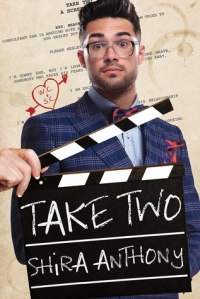 Shiver me timbers! When Professor Wesley Coolidge accepts a summer job as a historical consultant to a pirate movie being filmed in North Carolina, the last person he expects to bump into is his soon-to-be-ex, movie star Sander Carson. Just like the flamboyant pirate he’s playing, Sander, aka Sam Carr, is used to getting what he wants, and he makes it clear he wants Wesley back in his life.

Sam acknowledges it’s his fault they split up. He lost Wesley when he left their life in New York City behind for a career in Hollywood. But Wesley has finally managed to put the pieces of his heart back together, and he isn’t interested in Sam and Wesley: The Sequel. Sam soon realizes that convincing Wesley to give their relationship a second chance will take much more than apologies and reminders of good times past. If he wants Wesley back, Sam will have to show Wesley that they really can sail into the sunset together—a real-life happily-ever-after that won’t end once the final credits roll.

Take Two by Shira Anthony is a different sort of story then the ones we’ve been reading lately from this author.  Far from the action/adventure or fantasy epics of recent releases, this romance of lovers trying to find their way back (or at least one) to the magic that was once theirs brings me back to the tone of the Blue Notes series and the books where I found Shira Anthony.

Lovers reunited is a trope I adore, especially when its one lover trying to win back his true love.  That the lovers here are older makes this story just a tad sweeter and more perfect.  Sam knows he screwed up big time (how much he’s yet to realize) but he know he wants Wesley back.  The story is all about Sam’s doing what it takes, physically rearranging things like schedules, growing emotionally, whatever, to get Wesley back.  Things do not fall into place, although it seems as though its going to happen that way at first.  Life is never so accommodating and Anthony is well aware of life’s foibles and whimsy.

Wesley too has a bit of relationship blinders on, ones that anyone whose had relationship issues or problems will recognize.  Whether its with current relationships or ones in the past, the author realizes that the need to see what we want to see rather than what’s really occurring is a strong overriding emotion.  Its an authentic need and a thread that runs throughout the story.  And as we are pulled into Wesley’s turmoil of a life and his mixed-up inner emotions, we wonder what’s it going to take to bring Wesley to take his blinder’s off and …boom…we’ve fallen in love with both men and their problems.

Of course, it helps spectacularly that Shira Anthony has set her story on Bald Island, NC a place the author is intimately familiar with.  A lifelong sailor herself along with her husband, the scenes on the water, in and around as well as on Bald Island are vividly and lovingly described because she feels that way about the place.  It shows.  I wanted to grab a plane, car or boat and head there myself.  There’s a sea rescue too that’s as white knuckle as they come. Yes, that’s  authentic as well.

I think that’s why this story reminded me so of the Blue Notes story.  Where those were focused on the musical world that Anthony was a part of for so long, Take Two is surrounded by another element in Anthony’s life, that of sailing, the water, and North Carolina.  Her deep love and knowledge of all three shines bright here as music does in the Blue Notes series.  That made me hope that perhaps another series could be coming.  There is a secondary couple here.  I would love to see where their romance takes them. Plus the Barbary Pirates need exploring right?

Things I haven’t mentioned?  History and pirates!  Yes to both!  I loved learning about the pirates of North Carolina and definitely wanted more, along with the humor that the author threw in to go along with it.  There’s some wonderful giggling moments here, along with a few ‘laugh out loud’s too. Ah, me. Wonderful characters, lovers reunited, sexy scenes, sailboats, and pirates!  Argh, me hearties!  This romance was everything I wanted and more.

Cover art by L.C. Chase is missing several elements.  I like the script.  But where, oh where, is Bald Island, NC, the sailboats and the pirate ships?