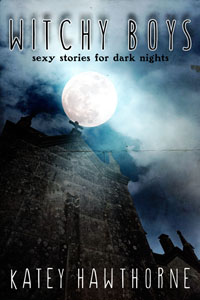 Just in time for Halloween! Two novelettes about men with magic—and the occasional demon.

“Blood Magic and the Mini Zombie Apocalypse”
Griff has a bad habit of getting talked into black magic he shouldn’t be using—but this time it’s even worse. His ex is bent on revenge in the form of a mini zombie apocalypse, and the only person who can help Griff is a hottie white magic practitioner named Blythe. The catch: one of Griff’s spells gone wrong left Blythe with a haunted apartment a year ago, and Blythe isn’t over it.

Still, Blythe agrees to work with Griff. As they unravel the ugly blood, sex, and death magic, they also discover surprising things about each other. Hopefully, it’s enough for the ultimate trust they’ll need to defeat a lot of zombies and a crazed witch, or their town will end up covered in corpses.

“Præsidium”
Six years ago, Thackeray agreed to let a demon haunt him in exchange for help hunting other demons. It’s a lonely life, but worth it to be the best demon hunter possible — to save families from the kind of evil that ruined his own childhood.

This Hallowe’en, Thackeray’s dealing with an upstart coven. A powerful, pretty witch named Matt defects to help Thackeray stop their scheme to invite god-knows-what from the other side.

Demons are much easier to fight than the urges Matt’s flirting inspires. But Thackeray can’t hook up with a demon watching over his shoulder… can he?

October is certainly the perfect time to release stories supernatural in nature and about witchy boys in particular.  Katey Hawthorne’s Witchy Boys: Sexy Stories for Dark Nights gives us two such couples for your supernatural reading pleasure.

The first story,”Blood Magic and the Mini Zombie Apocalypse”, is the tale that raised up some issues for me.  I loved the idea of a mini zombie apocalypse…who wouldn’t?  Katey Hawthorne does her absolutely spooktacular best when describing the rising of the zombies and the manner in which they were then dispatched.  I could see that so clearly.

Actually, Hawthorne had me pretty much most of the story, including Blythe and the ex with zombie domination on the brain.  All fantastic!  But there’s just one thing that got me…that was the character of Griff.  I just couldn’t connect to someone who I thought was just too dumb, no matter how pretty everyone seemed to think he was. That character flaw stopped me cold. Half the time I thought Blythe (who I adored) should toss old Griff off and find someone far less troublesome. Not a good thought in a romance.  However, other readers may find Griff naive rather than idiotic, so I’ll leave the choice up to you.  The rest of the story is marvelous.

“Præsidium”, now here’s a neat story to sink your teeth into.  A demon hunter who’s made a bargain with a demon prince.  What a conundrum, what a disaster its made of Thackeray’s love life.  Its a real twist on the demon hunter tales.  My  only real argument here?  That Hawthorne has delivered three wonderful characters that cries out for a much larger novel.  We learn just enough about Thackeray, Seir the demon prince and, the new pretty witch Matt to pique our interest in all three and their probable future together.  The story cuts off just as its all getting interesting.  One case solved with the  potential for a bright and wild future ahead.  I thought this story made the book.  At least it did for me.

Love witchy boys and stories of the supernatural?  Are you a fan of Katey Hawthorne?  Its October.  All Hallows’ Eve is coming.  Combine with two with Witchy Boys: Sexy Stories for Dark Nights by Katey Hawthorne.

Cover art works beautifully as a lead in to a collection of supernatural/paranormal stories about witchy boys.