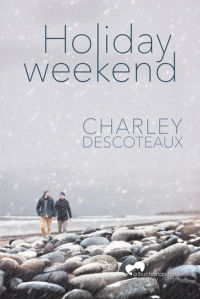 Ryan Orchard moved from small-town Idaho to Portland almost two years ago and still feels like a hick. When Paulie Nesbitt dumped him, he wasn’t even surprised. Despite losing twenty-five pounds since then, Ryan’s confidence is nonexistent, and his life has stalled. Not only is he convinced the career he wants is beyond his reach, he’s given up on relationships. A new job at a familiar restaurant—and his gorgeous coworker—could be just what Ryan needs to believe in himself again.

Glenn Hernandez might be the only nineteen-year-old in Portland who dreads his days off. Between his horrible housing situation and the ever-present temptation to crawl back into the bottle, Glenn prefers to keep busy. He volunteers at the Elliott Foundation House, a homeless shelter helping LGBTQ former sex workers. As an alum of the shelter himself, Glenn finds it hard to leave his past behind. But when the new server at the trendy restaurant where he works catches Glenn’s eye and works his way into his heart, Glenn finally has a reason to start a new life.

Holiday Weekend is a sweet novella. Just like Pride Weekend, this is a short and to the point side story. We get to see the main characters from the other books, but they are simply part of the overall atmosphere. In reality, Glenn’s and Ryan’s story don’t interfere with the relationships of those living at the Buchanan House.

This story has a more new adult feel than the others. It takes us through Glenn’s and Ryan’s journey of self-discovery and trust. They came from different backgrounds, but circumstances only made them stronger in the end. I’m glad for the slow burn and the time they spent getting to know each other.

Both characters were flawed but they were able to be there for the other. They worked well together, and that translated to their relationship. They were sweet and almost innocent, even after everything they went through. And I loved seeing how real Glenn’s day to day struggle was.

I wanted to see a little more of the time frames that were skipped over, but I understand the constraints of a novella.  It’s nice that they got their HEA, but it was just too fast for the reader to really get invested in the couple. Overall, this story is a nice addition to the series.

Another perfect cover by L.C. Chase. It matches the series and the holiday season just like the story itself.