Buy Your Copy Today at

Our Interview with Aidee Ladnier!

Thank you so much for inviting me on your blog today! I’m excited to be posting about my new book, THE APPLICANT. I love my characters Forbes and Oliver, and I’m looking forward to sharing them with your readers.

So now that you know a little more about me, what would your romance novel be titled? Tell me down in the comments!

Don’t forget to sign up for my Rafflecopter Giveaway. There are prizes and gift cards! Must be 18 years of age or older to enter.

How can something so cuddly and adorable be so destructive? The teddy bear robot decimating his lab is only the first disaster of the day for roboticist Forbes Pohle. If he can figure out how to end its rampage, he still has to interview applicants for the position of research assistant and convince the time-traveler on his doorstop that they should be making their future right now. Oliver Lennox didn’t travel back in time to have a quickie in the blast chamber—but it certainly is fun. This younger Forbes is a sweeter, more innocent version of his lover. And it will be hard to leave him behind in the past.

If you like sexy nerds, humor, plenty of action, and a love story not even time can disrupt, this romantic adventure has the perfect credentials for the job.

Excerpt from THE APPLICANT by Aidee Ladnier

Forbes Pohle worked the needle-nose pliers carefully behind the eye sensors of his teddy bear. He needed to make one little adjustment—

The buzzer on the door sounded, nerve-jangling and insistent, from the speaker overhead.

Startled, Forbes jerked the wire he was fiddling with free from its connection, rendering the small robot blind. The head-plate spring snapped, and the access panel clipped his hand as it closed. Forbes swore and shook his stinging fingers as the front door buzzer blared again.

Frustrated, he threw down the pliers and ran both hands through his mop of brown hair. Reacting to the clatter, the tiny robot turned its head left and then right before running off the table.

Luckily the teddy bear caught itself with its face when it hit the floor.

Undaunted, the bear scrambled to its furry feet and darted toward the other side of the lab. Forbes sighed at the sound of another imperative buzz.

“You won’t get the job if you don’t stop with the doorbell.” He stood and shoved the ends of his wrinkled white dress shirt back into his khaki pants. He typed in the power-down sequence for the bear before shutting the lab door and walking toward the front of the house. His visitor had graduated to using the door buzzer as percussion, the drone now going off and on in a jaunty rhythm.

Forbes still wasn’t sold on hiring a research assistant, but he wanted a lab assistant and he needed an administrative assistant.

Most of all, he longed for a friend.

Hiring someone wasn’t the best way to go about finding one, but working with somebody was a good start, right?

Forbes checked his reflection in the foyer mirror. The dark brown of his eyes was almost invisible against the bloodshot whites. His stomach rumbled, and he promised himself he’d take a break and eat as soon as the interview concluded.

At the next buzz, he spun and yanked open the large front door. Holy crap.

He wished he’d gotten a little sleep last night instead of staying up to tinker with the bear.

A wiry man stood on Forbes’s doorstep. He was dressed in a T-shirt, tight black jeans, black nail polish, and red Chuck Taylors. His strawberry blond hair was spiked up in front. The corners of his eyes and his freckled nose wrinkled.

Forbes blinked back his surprise and opened his mouth, expecting words to come out. He cleared his throat and tried again. “Come in.” Forbes waved him inside the house. “I’m Forbes Pohle. I’m the one who posted the job listing.”

The man grinned and held out a hand. “Very pleased to meet you, Dr. Pohle. I’m Oliver Lennox. Please call me Oliver.”

Forbes blushed at the title as he clasped Oliver’s warm hand. Forbes was a PhD three times over, but he hadn’t put that in the advertisement.

“If you’ll come this way, we can talk in the lab.” He turned and walked back down the hallway to the adjacent laboratory, assuming the applicant would follow.

“Oh, I didn’t come about…,” Forbes heard him say before he ran into Forbes’s back. To be fair it wasn’t his fault. Forbes had stopped short in the lab doorway.

During the few minutes he’d stepped out to answer the door, the laboratory had been destroyed. 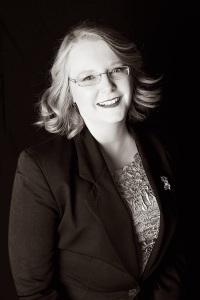 Aidee Ladnier, an award-winning author of speculative fiction, began writing at twelve years old but took a hiatus to be a magician’s assistant, ride in hot air balloons, produce independent movies, collect interesting shoes, fold origami, send ping pong balls into space, and amass a secret file with the CIA. A lover of genre fiction, it has been a lifelong dream of Aidee’s to write both romance and erotica with a little science fiction, fantasy, mystery, or the paranormal thrown in to add a zing.

You can find her on her blog at http://www.aideeladnier.com or on her favorite social media sites: