Available for Purchase at

My writing has always mimicked my own life.  Maybe that’s true for all authors.  Maybe it’s just me being self-absorbed. Let’s hope it’s all authors…

For me, my life is split into two separate parts.  Actually, there’s way more than two, but in this sense, just the two.  I grew up in a small farming Ozark town of 3,000.  I moved to Denver, which I thought was the biggest city in the world at the time.  I love Denver, but if it wasn’t for my nephew, I’d be moving again.  It feels too small to me now.  I want SanDiego, Seattle, New York, San Francisco!  Though I’m an introvert who doesn’t want to talk to people, I do love living in a city.

My writing often follows that same path.  My books are set either in small, rural towns or large cities.  I’m fascinated with the difference between them.  How the rules of society and interaction are so varied and distinct.  They really are very separate worlds.  And the people who adamantly prefer one over the other are typically very different types of people.

In Nachos & Hash, I wanted to play around with the two men who were relatively new to the ‘big city’ life of Denver. Both of whom are from small Midwestern towns.  Both of the characters are young (Cody being 21 and making him my youngest character yet) and both are coming of age in very different ways. And believe me, coming of age in a city instead of small town is a dramatically different experience.

Cody and Darwin both capture different parts of me when I was coming out and coming of age, though both of them came out quicker than I did.  Cody is 21, but a young 21 in a lot of ways, at times almost feeling childish.  Darwin, at 24, is an old 24, at times making choices far beyond his years.  If you put both of these men together, you get the mess that I was through my twenties.  In so many ways younger and more naive than my peers. And scared shitless.  But on the other hand, I was vastly more mature and ‘old acting’ than my peers.  There was huge split in my experiences that made both of these things happen at the same time. I guarantee, at times, you’ll want to shake Cody for being too childish and likewise roll your eyes at Darwin for being such an old man.  However, I firmly believe age is just a number and few of us fall into where we are supposed to be all of the time.  It’s in that awkwardness, that transition from country-life to city-life, from childhood to adulthood, with all of it’s ugly twists and turns that I think will make you both relate to Cody and Darwin and allow you to fall in love with them.

One random person who comments will receive a $5 Amazon gift card!

Please come along to Joyfully Jay on the 23rd to get a sneak peak at the entire series.

Darwin Michaels is living his dreams in the Mile High City. While Denver offers the perfect job, scrumptious dining, and whirlwind dating options, Darwin is losing hope he’ll find the right man to spark his interest for more than a one-night stand—until he sets eyes on Cody Russell.

Cody has just accomplished his life’s goal—get the hell out of Kansas. In one fell swoop, he lands a job at Hamburger Mary’s and gets a newfound family and the chance to be with other gay people! All that’s missing is someone special. But when Darwin shows his interest, Cody is sure it’s too good to be true. After all, what can Darwin possibly see in the high school dropout serving him nachos?

As Darwin falls in love, Cody struggles to realize his worth. When his past threatens the fragile life he is building, Cody spirals into a moment of dark desperation. But Darwin is determined to show Cody that love and family and home are there “for him… will Cody accept what is offered? 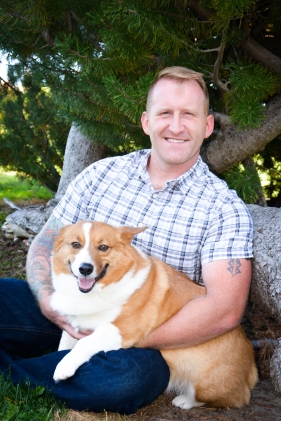 Brandon Witt’s outlook on life is greatly impacted by his first eighteen years of growing up gay in a small town in the Ozarks, as well as fifteen years as a counselor and special education teacher for students with severe emotional disabilities. Add to that his obsession with corgis and mermaids, then factor in an unhealthy love affair with cheeseburgers, and you realize that with all those issues, he’s got plenty to write about….

One random person who comments will receive a $5 Amazon gift card!  Don’t forget to leave your email address should you be the one who Brandon chooses.  Contest ends January 27, 2017 at midnight.  Must be 18 years of age or older to enter.