Available for Purchase at

Scattered Thoughts and Rogue Words is happy to host Ingela Boehm here today to talk about writing, inspiration and her novel, The Seventh Flower. Welcome, Ingela.

The difficult art of giving up by Ingela Boehm

The inspiration for this story came, paradoxically enough, the very day after I decided to lay my writing on the shelf. I was written-out, exhausted, and even a little fed up with my own stories. I’d churned out a few novels in quite a short time and felt like I had nothing more to say. Ever. So I allowed myself to give up. Even promised myself to.

Well. Giving up is a difficult art. At least in my experience, declaring that you’re, say, not looking for love is a guarantee that you’ll meet your soul mate within a week. In my case, it was Christer meeting his soul mate, but that soul mate had a real life counterpart. I’m not going to name him here (no, stop badgering me, I’m not gonna tell), but he’s a fairly well known face in the music world – in that slightly unknown-indie-but-still-huge kind of way.

So. First day of my non-writing life, I’m lazily youtubing this band I’ve just discovered, and I come across this silly little thing called Innuendo Bingo. It’s a game on BBC Radio 1 where guests and an in-house opponent sit opposite each other and fill their mouths with water before listening to a series of innuendo-laden phrases cut from various BBC programs. For example, there might be a woman talking about snails in a way that make you think she’s talking about certain body parts, and when you only listen to the bits where it’s not clear that it’s about snails and nothing else, it can be rather funny. So the point of the “game” is that the “contestants” laugh so much at the innuendo that they spray each other with the water they have in their mouths.

I told you it was silly.

It’s also really, really amusing to look at – especially the episode featuring the above mentioned indie star. I will confess that I watched and rewatched it many times over the course of about a week – not because the innuendos were so very funny, but because of the way said indie acted. He just ticked all my weird boxes, being all submissive and cheeky all at once. Long lashes, giggles, a raised shoulder… the slightly heart-wrenching way he’d never get to finish a sentence because someone else was more brash and took up more space. It was absolutely adorable to me.

And so I created Henrik.

Anyone who’s as charmed by the mystery unnamed celebrity as I am might just guess who it is. I haven’t changed much about him – in fact, he’s only a different person in name and vocation. Apart from that there’s the same style in clothes, the same hair and eyelashes, the same smile. Because I just couldn’t refrain from writing him. And that was the whole problem. I’d promised to stop writing, and along came this guy who just begged to be described, to be worshipped, to be paired off with his perfect counterpart. And I… couldn’t say no.

In fact I never could. I’ve thought so many times in my life that I have no more stories, that there are no words left in me, but every time I’ve been wrong. Because there’s always a new character lined up to catch my eye, to beckon me, to lure me in with sweet nothings. They never do shut up. They want their saucy ways documented for posterity.

And boy am I glad they do, because without them I would be very bored indeed. 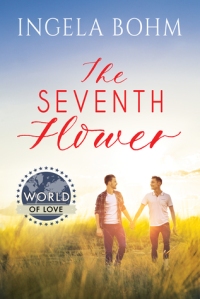 About The Seventh Flower

Christer is too old to believe in fairy tales. He’s not the kind of guy to pick the proverbial seven flowers on Midsummer’s Eve so he can dream of who he will marry, and he certainly isn’t the type to fall for someone he’s just met. Especially not a womanizing blogger named Henrik.

Besides, Christer’s previous marriage didn’t end with a happily ever after. Therefore he has no interest in gifting his heart to someone who lives five hundred miles away and probably isn’t even gay. His family is right: it’s time he grew up and stopped dreaming.

But Midsummer’s Eve in Sweden is a magical night, and Henrik won’t stop flirting. As the midnight sun shines down on the misty woods, maybe there’s room for one last dream.

Ingela Bohm lives in an old cinema, tucked away in a northern Swedish forest where she can wander around all day long and dictate her books. She used to dream of being an actor until an actual actor asked, “Do you really need to do it?” That’s when she realized that the only thing she really needed to do was to write. She has since pretended to be a dietician, a teacher, a receptionist and a cook, but only to conceal her real identity.

Her first imaginary friend was called Grabolina and lived in her closet. Nowadays she has too many imaginary friends to count, but at least some of them are out of the closet. Her men may not be conventionally handsome, but they can charm your pants off, and that’s all that matters.

Ingela’s more useless talents include reading tarot cards, killing pot plants and drawing scandalous pictures that no one gets to see. She can’t walk in heels and she’s stopped trying, but she has cycled 12 000 miles in the UK and knows which campsites to avoid if you don’t like spiders. If you see her on the train you will wonder what age she is.

To get updates on Ingela Bohm’s work, please sign up for her newsletter or connect at her

Not Safe For Work

All You Can Eat