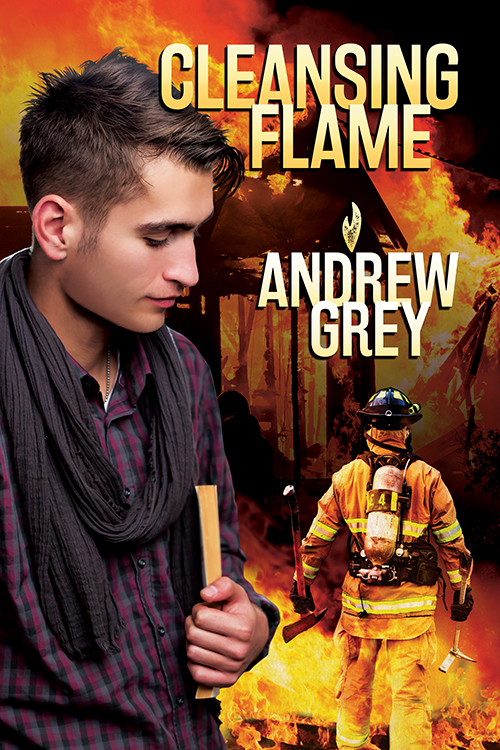 Available for Purchase at: Amazon | Barnes and Noble | Dreamspinner Press

Scattered Thoughts and Rogue Words is happy to have Andrew Grey here today to talk a little about the inspiration behind his latest story, Cleansing Flame, the second novel in the Rekindled Flame series.  Welcome, Andrew.

The idea for this story came from an old diary that I found in some things in the house.  It wasn’t important and didn’t contain anything all that interesting.  However it did get my mind running and I thought about what would happen if the diary had been something special. As I was mulling those thoughts a reader asked me to write a story about the Carlisle Indian School.  As I was finishing up my previous story, my mind churned the two things together and I ended up with the basis for Cleansing Flame.  I’ve never written a story with this kind of element before and I don’t know if I will again.  But I did fall in love with both sets of characters.

Life has been grinding Dayne Mills down almost for as long as he can remember. First he lost the love of his life in an accident that also left him with a permanent injury, and then his mother passed away a year later. When his house burns to the ground, it’s the last straw. He can’t take any more, and if it wasn’t for kind and handsome firefighter Lawson Martin offering him a hand up and a place to stay, he doesn’t know what he’d do. Dayne would love for his relationship with Lawson to evolve into something beyond charity, but he knows going after a man so far out of his league will only lead to yet more heartache. It’s best to just keep his mind on his research.

It’s that research that leads Dayne to an old student journal that not only provides clues to the Native American heritage Lawson has been searching for, but chronicles a century-old love story. The tale that unfolds might be just what Dayne and Lawson need to remember that no matter how dark life becomes, love can find a way to shine through.

Dayne pulled his car into the drugstore parking lot across the street, got out, and walked up to where a group of neighbors had gathered. He turned to where they were all looking and gasped as flames shot out of the windows of his little house.

“Oh God,” Dayne mumbled as he hurried forward. Everything he owned was in that house. It was all he had left of his mom. As flames shot out of front door and the roof collapsed, Dayne’s legs gave out and the grass rose up to meet him.

“Hey,” a deep voice said from close to him. Dayne felt like a fool and struggled to get up. He was helped to his feet, and the fireman took off his helmet. “It’s you.”

“That’s my house…,” Dayne said weakly as water sprayed all over what was left of the only home he’d known. “Everything I have….” He gasped and tried not to come apart at the seams.

“It will be all right.” He took Dayne’s arm and gently helped steady him.

“I don’t see how.” One of the walls fell in, and Dayne turned away. Everything was gone. The last of what he’d had from his mother had been in that house, and the flames had taken it all. A cloud of steam went up as the last of the fire died away, leaving only a smoking ruin of what had been his life.

“I’m sorry this happened to you.” The firefighter gently put an arm around Dayne’s shoulder, and the last of Dayne’s control broke.

He buried his face in the man’s chest and cried like the stupid baby he was. Damn it, he tried not to, but this was too much. For a year, he’d been doing his best to hold it together, to get through each day as it came, hoping the pain would lessen. But every damn time he thought things might be getting better, something happened, and this was the worst.

Dayne heard people around him, but he kept his face where it was for a bit, afraid to look for fear of dying of embarrassment. Dayne breathed deeply and backed away, swallowing and getting himself together. “I’m sorry.” He wiped his eyes and tried not to get snot all over himself.

“Don’t be.” The man didn’t move, and Dayne lifted his gaze.

“I guess after I slobbered all over you, I should tell you my name. I’m Dayne.” He wiped his hands on his pants because they were covered with things he shouldn’t have on them.

“I’m Lawson Martin.” He took Dayne’s hand and held it.

Andrew’s hobbies include collecting antiques, gardening, and leaving his dirty dishes anywhere but in the sink (particularly when writing)  He considers himself blessed with an accepting family, fantastic friends, and the world’s most supportive and loving partner. Andrew currently lives in beautiful, historic Carlisle, Pennsylvania.

For Other Works by Andrew Grey