Scattered Thoughts and Rogue Words is happy to have Lindsey Black here today. Lindsey is the author of one of my new recommended story’s Fishy Riot.  Welcome, Lindsey!

Thanks for having me today!

I thought I would talk briefly about inspiration. Writers will tell you all sorts of things about inspiration, and where it comes from. A lot of writers will admit to finding inspiration in day to day life, or from their acquaintances. For example, Taylor is a Riot Squad officer because my brother in law is in the squad and I think it’s a pretty cool job, not that I would ever tell him that, his ego’s big enough as is. If it’s true that we draw inspiration from day to day life and acquaintances then it should come as absolutely no surprise that Fishy Riot is a tad on the crazier side of things.

I’m a singing teacher (as in I teach singing, not I sing while teaching because that would be weird), and I work with individuals from 8 years of age to 80 on a weekly basis. Nothing can ever prepare you for the weird things people feel inclined to tell you when you’re their teacher. My students wish they had a twitter account of all the weird things that get said, and I’d have to agree it would be the weirdest daily read in history. So I thought I would share ten of my favourite personal gems from the last few weeks.

Student 2: Don’t give her ideas! She’s clumsy as. It would just fly across the room and hit someone in the eye and you know she sucks at first aid, and I’m not gettin’ you a band-aid. (I confess to breaking the CPR dummy at three separate first aid classes. Student number 2 has a point.)

It should come as absolutely no surprise that the characters in Fishy Riot are crazy. They probably seem over the top, a tad mentally deranged even, but they’re actually mild compared to reality. I hope you enjoy their shenanigans. Happy reading! 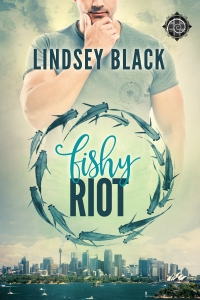 Most people think riot squad officer Taylor Jameson is an asshole. Little do they know his apparent indifference stems from having a meddlesome family always butting into his business. And little does Taylor know he’s about to stumble into a situation that’ll make indifference impossible.

When everything goes horribly wrong at a political rally on a harbour ferry, Taylor encounters Sietta Salisbury. The son of a wealthy politician, Sietta is a revered—but presumed dead—musician, and an enigma who is so strange, Taylor is compelled to look into his background. What he discovers draws him into a bizarre mess of prisoners, politics, and attempted murder that makes him realise what he’s been missing.

Falling in love isn’t hard. Trying to convince someone else you’re worth loving despite your crazy family and the people trying to kill you? That’s a whole other can of worms.

Lindsey Black lives in Darwin, Australia, where the weather report permanently reads ‘humidity at 100%, only going to get worse’ for ten months of the year and ‘monsoon at 4:00 p.m. for exactly fifteen minutes’ for the remaining two. Between teaching and studying full-time, she escapes this oppressive environment to bushwalk for weeks on end wherever the mobile phone reception has zero bars for as long as possible and the weather report reads something along the lines of ‘blizzard likely.’ She enjoys martial arts, music, and mayhem, which explains the untidy state of her home where she attempts to write while splitting her minimal amounts of spare time between her incredulous husband, lazy Chinchilla cat, and crazed Siberian husky. If you expect her to sit and have a chat, it’s best to have a matcha green tea latte with almond milk on hand and your hiking boots within reach. Oh, and be sure to bring a guitar for impromptu jam sessions.