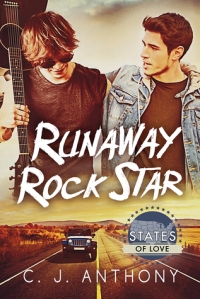 Just hours before Brandon Harris is supposed to head home to Cincinnati for a Labor Day family picnic, his boss at the Rock & Roll Hall of Fame forces him into giving a private tour to bratty British pop-rock star Lucas Black. Before he knows it, he finds himself swept up on a whirlwind road trip through Ohio with Lucas.

Lucas was a celebrity since he was a teen, and his life was always controlled by his father and manager. He wanted a break. He needed it. So, when he met Brandon and found out the guy was heading to Cincinnati, he decided to hold of this opportunity to run away—even for a few precious days.

When Lucas asked Brandon to give him a lift to Cincinnati, Brandon didn’t suspect the guy was running away without anyone to know. So, of course, he was a little mad when he found out. He could lose his job for it, oh crap. But after Lucas explained how was his life and how he needed just a few days of freedom, Brandon agreed to take the pop-rock star with him. The fact Lucas was hot, it was just a bonus. So bad the guy was straight, right? Well, at least it was what the media had said.

I really enjoyed reading it. Ok, It was a little frustrating as well, but I’ll explain it in a second. Let’s talk about the good things first.

This book is part of States of Love series. In this series, each author selects one state and surround their story around that area. Ohio is where Runaway Rock Star’s story took place and I really liked to know more about this state: some of its sights and culture.
I also loved the writing. It was easy and fluid.
The characters were great, really great. How can you not love Lucas Black and his energy? He was like a kid in a candy shop since that was the first time he had a little freedom in years. And Brandon was a sweetheart for following Lucas and giving him something good and simple in his life for a few days. Loved them both. I connected with them. And I cheered for them to be together. I also felt empathy for Lucas and his story and was crossing my fingers for him to break free from his father.
There wasn’t insta-love or insta-lust and it just earn the book extra points with me. I liked how their friendship was developed and how the characters evolved. Their chats were so nice to read. I especially loved it when they had good conversations, discovering what each other liked and the things they had in common.
The frustrating thing about this book was the length. It was too short and the story felt rushed in some parts, where it could be more elaborated.
<spoiler>
Also, the end was a little abrupt. I was like “What? Already finished? NOO! I want more!”.
This book really needs a sequel.
Besides these negative points, It was a good story, light, sweet and low angst. I really liked to read it.

The cover art by Anna Sikorska is pretty and suits the book.
Sales Links