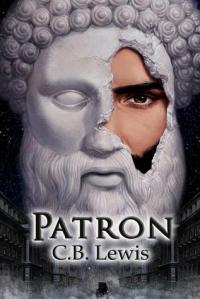 Theodore Wentworth, who possesses little more than a sharp and well-educated mind, is trying to solicit a sponsor for his studies of Greek antiquity by performing recitations at gatherings of collectors. Desperate for luck and better skills in oratory, in jest, he places a coin at the feet of a statue of Hermes. It seems like coincidence when his fortune turns and a gentleman calling himself Alexander becomes his benefactor. Despite his friend John teasing him about it, Theodore continues to offer tokens to Hermes and sinks himself into his study of the classics.

Alexander encourages Theodore’s interest, prompting Theodore to face desires he tried to put aside years before. As Theodore embraces the knowledge, he must also resist his attraction to Alexander—knowing his feelings are a serious crime in Victorian England.

But the secret Alexander keeps will change everything in a love story for the ages, steeped in taboo, temptation, history, and myth.

Patron by C.B. Lewis was a terrific novelette!  I wasn’t expecting to be quite as captivated by Theodore and his mythological lover as I was.  Lewis weaves a tale of increasing mystery, personal exploration, faith and love set within Victorian England. The author lets us know that Theodore has an open mind and heart by giving him a friend (half Indian) that British society of those times looks down upon. John and his wife (a couple I was swift to take to heart) are Theodore’s best and perhaps only friends.  John even has knowledge of Theodore’s leanings (never acted upon really)  towards men instead of women.    Theodore’s life changes one evening when he lays a coin down at the feet of Hermes, wishing for luck and the best speech of his life during a gathering of great and influential men. Theodore emotes brilliantly.  And the story takes off.

Lewis does a beautiful job of capturing the details of 1860 England, right down to the boarding house where Theodore lives and the clothes he wears.  From the lower to upper levels, we get the entire picture (as much as you can skillfully lay down in 78 pages).  It’s a great atmosphere in which to bring out the wildly romantic mythic element.  It’s in keeping with the times, enraptured as they were with the classics and using Hermes instead of one of the other Greek gods was a usual choice but one I adored.

Little by little, we build up to the ending.  I thought it was exactly right.  But did I want more?  Yes, of course.  You will too.  Such a little gem, this is!

Patraon by C.B. Lewis is a quite, delightful read, especially for those who love the Greek classics, mythology and romance.  I highly recommend it.

Cover Artist: Blake Dorner.  Love, love this cover by Dorner.  Its perfect in every way.