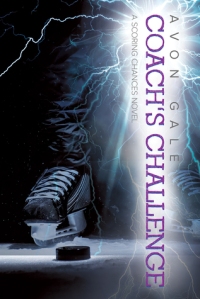 It’s been decades since blackmail forced Troy Callahan to retire from playing professional hockey, and he’s built a successful career behind the bench. When he’s offered the opportunity to coach the Asheville Ravens—the most hated team in the ECHL—he’s convinced that his no-nonsense attitude is just what the team needs to put their focus back on hockey. But Troy is disheartened when he finds out the Ravens have signed Shane North, a player known for his aggression—especially when Shane’s rough good looks have Troy thinking inappropriate thoughts about a player, even if he’s set to retire at the end of the season.Shane’s career in the majors never quite took off. Wanting to quit on his own terms, Shane agrees to a one-year contract with the Ravens and finds himself playing for a coach who thinks he’s an aging goon, and with a team that doesn’t trust him, Troy, or each other. Despite his determination not to get involved, Shane unwillingly becomes part of the team… and is just as unwillingly drawn to the gruff, out-and-proud coach. As the Ravens struggle to build a new identity, Shane and Troy succumb to the passion that might cost them everything.
This was a really fun and entertaining read.  It was a lighter installment than the last two books in the series and it was nice to get back to the easy flow of the first books.  Troy and Shane are a bit older and their relationship is different in that it’s a coach/player dynamic.  Fortunately the way it was done didn’t leave any creepy power imbalance vibes.  Shane was older and close to retiring so he seemed like an equal to Troy.  They were both also snarky and funny and I think I laughed out loud more in this book than any of the others.  If you are a hockey fan you will really appreciate some of the remarks (& if not you’ll still be entertained).
I enjoyed the humor and the easy way they came together.  It’s nice to find romance books without all the angst and drama sometimes.  My only complaint though was that these two were so snarky and teasing with each other that I didn’t feel a strong connection.  I know that was their personalities but I wanted to see some sweet or loving or romantic declarations during their intimate times but we didn’t really get that.  I new really felt a love match between them.  A great friendship and some smexy times yes, but I wasn’t feeling the love even by the end.
This can be read as a standalone.  There are some cameos by Isaac/Laurent and Misha/Max (which is always a treat) but this storyline works just fine on it’s own.  We get to know a few other teammates a bit better and hopefully we’ll be seeing some of them getting their own books down the road.
If you’re a fan of the series I think you will enjoy this.  If you are knew to this series, this one wasn’t my favorite, but it was still really enjoyable and I would recommend it.
Cover:  This cover was done by Aaron Anderson.  I loved this cover and I think that this series has some of the best covers in the genre.  They are artistically striking but they also really represent not only the plot of the books but of the sport itself.  Every one has been fresh and different but equally good.
Sales Links:  Dreamspinner Press | Amazon
Book Details:
ebook, 200 pages
Published June 26th 2017 by Dreamspinner Press
ISBN139781635337662
Edition LanguageEnglish
SeriesScoring Chances #5