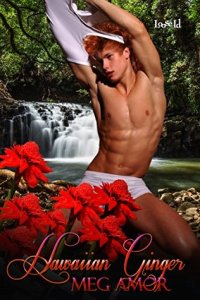 Zane Andrews, a striking redhead and severely deaf dancer, has a love of pretty aloha dresses and girly feminine things. He comes from a poor, and extremely sheltered, cultish background. When he and Danny connect after the winning tango, things heat up quickly. But what about Zane’s relationship with Kaleho? Guilt eats at him and he wonders what he’s doing.

Danny’s a fourth-generation Hawaiian Big Islander, from the wealthy Lucerno ranching family. He’s a dark-haired, smoldering mix of Portuguese male and Argentine sensuality who was fighting his attraction to Zane. But even he can’t deny where his heart has taken him.

When Zane decides to face Kaleho, Danny disappears to Las Vegas. Zane’s worried he’s gone back to his old, glamorous life he had with Paolo. Has he lost Danny?

Zane’s first time on a plane to Vegas away from Hawai’i overwhelms him. And what if Danny rejects him? Then Zane’s past catches up with him. His abusive birth parents sue Danny and his adopted family, the Masterson-Mahikoas, sending everyone into turmoil.

Can they finally heal from the past abuse of dysfunctional family relationships? Will Danny and Zane be able to accept each other’s backgrounds, insecurities, and express their deep feelings for each other?

As Hawaiian Fragrance (The Hawaiians #3) was Danny Lucerno’s story, Hawaiian Ginger (The Hawaiians #4) is Zane Andrews.  Zane, as we’ve come to know him, is one of Rob and Kulani’s lost boys (the Masterson-Mahikoas household now).  Zane is deaf, embraces both his male and feminine sides, especially true when it comes to dresses, makeup and jewelry, outward extensions of that part of himself that feels “girly” most of the time while still enjoying the fact that he’s male as well. Getting to know Zane has been an important and rewarding element of this series.  Amor has researched the speech patterns of those with the same level of hearing impairment as  Zane so his conversations “sound” as natural as one would expect from someone who’s severely deaf.  Another realistic narrative touch? That Zane’s thoughts flow as naturally as would someone with full hearing.  Only the misplaced words or misunderstandings make it into both inner and outer dialogs.  After four stories, Zane’s “voice” is one that lingers in my head and heart, complete with missed words and letters from his lip reading or hearing aids on the flux.

Throughout the series the author has given her readers tidbits and clues about each of the  “lost boys” backgrounds and reason for their initial homelessness before Kulani found them and made them into a family.  Here Zane’s history comes out (thankfully not explicit) to the extent that we start to comprehend the deep hell of abuse he suffered and survived.  I get the feeling that the elements left about his shaking, his sister,  and the compound might come out in future stories, something that makes me cringe and want to know more at the same time.  Either way, I don’t think we are done with the horror that is the Andrews family yet.

With Zane you get Danny as this story picks up after their competition and beginning of their romance.  Told from both  perspectives (important when you have a character as impetuous and insecure as Danny), the main focus is on Zane, his path towards self-acceptance and love, and perhaps, the final steps to making the Masterson-Mahikoas a complete family right down to an enchanting cat Mr. Beaumont.  It’s quite the journey, taking all of the family (Rob, Kulani, Zane, Danny and the Twins as well as Beau and Matty) off to New Zealand to see the grandparents and meet new cousins The Twos.  I have to admit the family trip to NZ is  one of my favorite elements here.  From the magical landscape, the two sets of grandparents (I won’t get into them here, but yes,  as grounded and heartwarming as you would want), an unforgettable Christmas beach vacation and two young men, The Twos, who surely we will see again when the twins get their own story.  It’s here that Zane finally gains acceptance and an insight into cultures  who embrace a third gender in their people.  Amor brings in cultures, family, mysticism and more for one more shining example why this series and this story has such depth and becomes what I consider a “must read” for everyone.

Finally, it’s both Zane and Danny’s story as they work through their issues of acceptance of each other while dealing with their own continuing emotional “ground tremors and earthquakes” left behind by their upbringings and childhoods.  Luckily they have their dads and plenty of support to help them through this rough passage.  Amor also delivers moving, emotional scenes guaranteed to leave you in tears time and again throughout Hawaiian Ginger.  How I adored this book!  The only reason I didn’t give this story a complete 5 star rating was that I thought the surplus of sex scenes at the beginning of the story kept the reader from diving into the plot and new relationship between Danny and Zane.  However, maybe that was the idea.  They were using the newness of their sexual relationship to keep them from talking to each other about the things they knew needed to be discussed.  And the author wanted us to see that as well as deliver some very hot sex!  But I found I wanted to jump right  into the heavier layers and save some of this for later.  But that was just me.

The final pages of this book left me cheering! You will be too.  I highly recommend Hawaiian Ginger and all the stories in The Hawaiian series by Meg Amor but they aren’t standalones and should be read in the order they have been published for the reader to get the full background, relationships and watch the character growth that occurs.  More stories are coming and I can’t wait to grab them up!

For those readers like me who can’t get enough of this family and series, don’t forget to check out Meg Amor’s Hawaiian Ginger page with the referenced flowers, locations, models etc.  It’s not to be missed either.

Cover art by Syneca Featherstone has some of the elements I love although that’s not really Zane I see in my head.