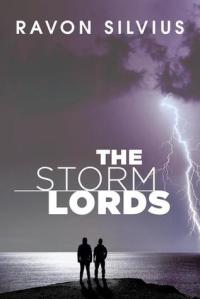 The heat took everything from Rowen: his parents, his voice when the local cure for heatstroke poisoned him, and the trust of his fellow villagers, who branded him a water thief. It would have claimed his life when he was deemed unworthy of precious resources and left in the sun to die, had not a strange man named Kristoff ridden in on the wind and told Rowen he had power.

Rowen works hard to become a Storm Lord, one of a secret magical group that brings storms to break the heat waves overtaking their world. But Rowen is starting his training at a disadvantage since he cannot speak and is much older than the other novices. The desire to please Kristoff inspires him to persevere even more than the threat of being sent back to his village to die should he fail. Still, he cannot gather rain, and when his abilities manifest, they are unlike anything known to the Storm Lords. Unless Kristoff can help him control his deadly powers, the entire world will be in danger.

Kristoff might be among the mightiest of the Storm Lords, but he’s never been a mentor before. For a chance to be with Rowen, he’s willing to risk everything.

This was a wonderful and well thought out story.  This story takes place in a well thought out world that sounds similar to earth but with some very big differences.  Rowen’s life has been very harsh when Kristoff rescues him and hopes that he may finally be able to help out his home village, if even from a distance.

Rowen works hard to master his abilities but what he feels isn’t quite what Kristoff and the other Storm Lords describe.  His lack of ability to communicate easily causes some of the problems and also keeps himself separate from those around him.  Kristoff isn’t sure what to do with his new charge but is willing to do his part of being a mentor.  Their feelings grow but both don’t want to cause any problems and don’t let their feelings known until it’s almost too late.

This story is told from both MCs points of view so we are able to understand their thoughts and emotions.  Rowen works so hard to become what Kristoff said he was but when they find out how his powers really work his safety and that of those around him is put at risk.  Kristoff tries to deny how he is feeling about Rowan and can’t help but be even more protective of Rowan as he works with him.  I felt for Rowan when he was suddenly taken from his home and all he has ever known to a new and foreign place and when he fears that he will cause harm to others with his powers.  I loved seeing Kristoff actually learn about how the choices for their world are made but he wants to make it better with Rowan.

Cover art by Aaron Anderson is absolutely perfect for this story.