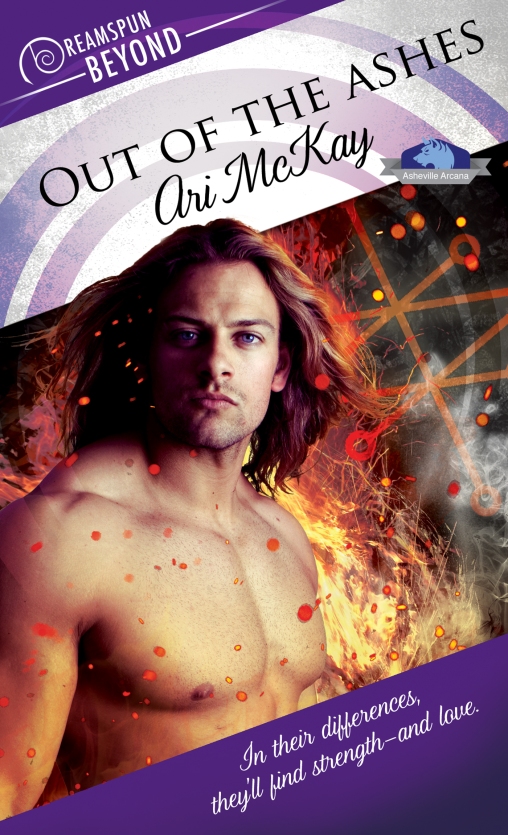 Scattered Thoughts and Rogue Words is happy to have Ari McKay here again talking fae, werewolves and romance with their latest novel Out of the Ashes! Welcome!

Hi, everyone! A big thank you to our hosts here at Scattered Thoughts and Rogue Words for hosting us today, and to you for joining us! Ari here again, bringing you an excerpt from our latest release, Out of the Ashes, the debut novel of the Dreamspun Beyond line and book one of our new series, Asheville Arcana! To say we are excited is definitely an understatement! We’ve been looking forward to this for months, and we’re over the moon that it’s finally here!!!

Out of the Ashes is a love story, and a mystery, and a drama, and a comedy, all built around a world where the creatures of myth and legend exist beside but unknown to the mortal world. We wanted to build a unique setting that was all our own, one where elves and dwarves, werewolves and wizards, ghosts and vampires and demons all play a part. At the same time, though, we had to balance our world building with the strictures of length and structure of the Dreamspun Beyond line, and we hope you enjoy this story, and that we give you enough of a glimpse of the bigger picture to make you want to come back for more! I’ve talked a lot in other places about how and why we came to this story, so today I want to just leave you with a taste of what we have to offer, to hopefully entice you into giving us a try! Enjoy!

MOST nights, Arden slept like a baby. Once his head hit the pillow, he was out like a light. Unless, of course, someone was sharing his bed, which happened with less frequency over the last ten years or so. He still had an active social life, but he’d begun working longer hours after building his second resort, the Hilltop. When he felt the need for intimacy, he tended to gravitate toward Whimsy and Julian and one or two other longtime partners, rather than jumping in to find someone new and exciting.

But after having dinner with Whimsy, Arden had kissed his friend good night and gone to bed alone. He told himself it was because he’d had a busy day, and the next day promised to be even worse, but the fact was that he couldn’t sleep for thinking about Eli Hammond.

The werewolf was gorgeous—there was no denying it. With a positively leonine mane of dark, sun-streaked blond hair and crystal-blue eyes, Eli was enough to make even someone as used to beauty as Arden sit up and take notice. He was also huge and buff, and Arden was desperately curious to see what Eli looked like naked, although his imagination insisted on supplying plenty of images to taunt him. But it was more than just his stunning looks that appealed to Arden, and more, even, than the tragedy of Eli’s plight. There was something special about Eli, and Arden felt drawn to him like a moth to flame.

Arden had, of course, noticed Eli’s aura at once, and it had nearly knocked him out of his seat. Not all supernaturals could see auras, but Arden, like his father, had been born with the gift. Other supernaturals—such as Julian—learned to do it after a great deal of study and meditation, but most couldn’t see them at all. And what Arden saw was stunning.

Every creature had a unique aura, determined both by what they were and who they were. Vampires, like Julian, all had a misty, silvery aura with different shapes and tones based on their age and if they were a good, bad, or neutral type of person. Elves tended toward golden, and dryads, not surprisingly, were usually green. Werewolves had deep crimson auras, but while the core of Eli’s had been red where Arden observed it close to his body, it quickly became a beautiful, multihued halo that was almost like looking at the sun. No one Arden had ever seen had looked so bright, and that was part of why he’d known he had to help Eli, no matter what the council or anyone else said about it.

But thoughts of Eli kept Arden awake most of the night. He felt himself pulled to the werewolf, as though there was an invisible connection between them. It was odd, but Arden found himself wanting to go check on Eli in the middle of the night, to make certain he was all right and didn’t need anything. Which was probably stupid, considering that Eli was an alpha werewolf who could obviously take care of himself quite well. Eli would probably think there was something very wrong with Arden wanting to cuddle up to him, run his fingers through Eli’s hair, and just be close to him.

He finally gave up trying to sleep and went to his office, immersing himself in paperwork until his watch beeped at him at his normal waking time. Taking himself off to the kitchen, he ordered up an enormous breakfast of bacon, sausage, ham, fried eggs, hash browns, grits, and toast. When the cook had prepared the tray, he picked it up and carried it out to Eli’s cabin, balancing it carefully as he knocked on the door.

A few moments later, Eli opened the door. His long, wavy hair was a sleep-tousled mess falling around his broad shoulders, and he wore only a pair of jeans that rode low on his hips. His chest and feet were bare, giving Arden an unhindered look at the sculpted pecs and washboard abs that had been hidden beneath his clothes yesterday.

Eli blinked sleepily at Arden and rubbed his neatly trimmed beard, but when he saw the loaded tray, his eyes widened with surprise.

For a long moment Arden couldn’t speak; it wasn’t every day that he got to see a warm, sleepy, nearly naked hunk of buff hotness up close. In fact, he couldn’t remember ever seeing anyone as gorgeous as Eli before in the whole of his three hundred and six years of life.

Alpha werewolf Eli Hammond returns from a fishing trip to discover a nasty surprise—five members of his pack murdered and the rest missing. He needs help locating and rescuing his pack mates, but the supernatural council in Asheville, North Carolina, turns him away.

Except for one man.

As they work together, Eli is stunned—and not especially thrilled—to discover half-elf Arden Gilmarin is his destined mate. But as Arden and his friends struggle to help Eli in his quest, Eli surrenders to the demands of his body—and his heart. They’ll need to bond together, because the forces opposing them are stronger and more sinister than anyone predicted. The evil has its sights set on Arden, and if Eli wants to save his mate and the people he is entrusted with protecting, he’s in for the fight of his life.

Ari McKay is the professional pseudonym for Arionrhod and McKay, who have been writing together for over a decade. Their collaborations encompass a wide variety of romance genres, including contemporary, fantasy, science fiction, gothic, and action/adventure. Their work includes the Blood Bathory series of paranormal novels, the Herc’s Mercs series, as well as two historical Westerns: Heart of Stone and Finding Forgiveness. When not writing, they can often be found scheming over costume designs or binge watching TV shows together.

Arionrhod is a systems engineer by day who is eagerly looking forward to (hopefully) becoming a full time writer in the not-too-distant future. Now that she is an empty-nester, she has turned her attentions to finding the perfect piece of land to build a fortress in preparation for the zombie apocalypse, and baking (and eating) far too many cakes.

McKay is an English teacher who has been writing for one reason or another most of her life. She also enjoys knitting, reading, cooking, and playing video games. She has been known to knit in public. Given she has the survival skills of a gnat, she’s relying on Arionrhod to help her survive the zombie apocalypse.