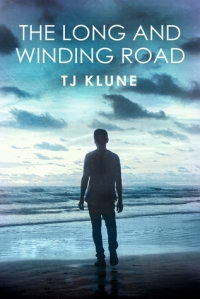 This entire book was one long paean of gratitude to love and family.  Which is, indeed, beautiful.

This book will mean nothing to people who haven’t read the rest of the BOATK (Bear, Otter and the Kid) series.  For those who are fans – like me – it is a very fitting ending to the series, but more than that it is a gentle and gracious goodbye to these beloved characters.  I won’t say it’s angst free (after all, is it physically possible for Mr. Klune to write a book without angst?), but the levels are much lower than in the three previous books.

We are back in Bear’s head for this one, but this is a more mature, confident, and settled Bear than in the earlier books.  The years of his marriage to Otter have given him a surety in the future, and happiness, that he was never able to believe in before.  He still has manic ramblings that lead him to outrageous hysteria like he had in the previous books, but the edge of panic isn’t there like it used to be.  It’s as if his thoughts are used to flowing into this crazy morass, but the reality of Otter’s love is now there to create a dam of sorts, to lift him out of the frenzy before it can really take hold.  So, still hugely entertaining, but no longer making the reader fearful of where it’s going to lead him.  Bear is continuously aware of how blessed he is to love and be loved by Otter and Tyson and his growing circle of friends and family, and he expresses that gratitude continuously, both aloud and in his head.  And I never got tired of hearing it.  He had been through so much pain in the past, and he learned never to take joy for granted.  Personally, I find that admirable and refreshing – I feel like it is much more common in our society for people to think they deserve that kind of joy regardless of what they’ve done with their life, or to lose sight of how amazing a gift it truly is once they’ve had it for a while.  Bear and Otter were able to look at each other with the love that comes from knowing someone else deeply and completely, and yet still be astonished by the depth of that love, and they expressed that love time after time.

When it comes from the heart, you can never say I love you too much.

The book starts in New Hampshire where Bear and Otter moved when Tyson started college at Dartmouth.  The story of Tyson’s spiral into panic and addiction was revealed (I have to admit when I read The Art of Breathing I had a bit of whiplash trying to figure out how the Kid got to that point when things were going so well at the end of Who We Are.  I needed to know this!).  Bear and Tyson’s harrowing early years had left them so enmeshed – which was both a strength and a terrible weakness – that the process of disentangling was bound to be fraught with difficulty.  Even more so than in The Art of Breathing, in this book I really saw Bear and Tyson become separate individuals, though still incredibly close.   After Tyson left the nest to embark on his own journey, Bear was finally able to focus on Otter and his long-deferred needs and wishes.  Seeing the return to Seafare through their eyes, coming back to where it all started in order to start the next chapter of their lives, was really the focus of the story.  And it was full circle – endings, but also new beginnings, and throughout, an attitude of hopefulness.

The secondary characters are, as always, so lovable and so much fun!  Creed and JJ were by far my favorites, but Dominic, Ben, Anna, and the rest of the crew were there, joined their half sister Izzie and  Megan (Bear and Otter’s surrogate) and her Lamaze instructor boyfriend with a pregnancy kink, Marty.  Mrs. Paquinn is never far from anyone’s thoughts, and her memory remains a touchstone.  The Green Monstrosity starts bursting at the seams with the additions to the family, and Bear’s freak outs about becoming a father were hilarious (as was his pride in his super sperm).  I loved how all the things that made Bear so entertaining in the first book were still there, but with so much more!

Cover art by Paul Richmond is exactly right for the book, in ways I can’t find words to describe.