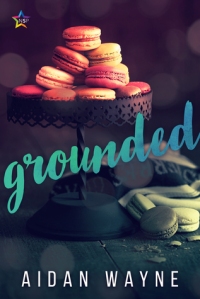 Between raising his daughter Camille, his work as a full-time pastry chef, and his hobby of capoeira, Baz’s life is pretty full. He may be a little lonely, but he’s too busy to think about it all that much.

When his cousin Alaina introduces him to Terry, another capoeira student, Baz is instantly drawn to him. Though quiet and withdrawn, Terry ends up being a fun, interesting person who Baz can’t help but fall for. And when Baz does things, he doesn’t do them halfway.

Terry is a successful voice actor and a talented martial artist. But the fact that he’s shy, on top of being a trans man, has kept him from really dating. He likes Baz, he does—he just doesn’t want to mess up their friendship by failing at romance. Still, Baz is nothing if not stubborn, and Terry is willing to give things a try.

This was a very sweet story.  Baz hasn’t dated since his daughter was born, allowing her and his job to take up his life.  When he meeting Terry he is intrigued and begins with starting a tentative friendship with the shy man.

Baz is willing to push Terry for them to move into a relationship but doesn’t want to scare him.  He is so understanding with Terry, almost unbelievably so, and the bumps along the way to build their relationship.

Terry has gone through so much with transitioning and how people have treated him throughout his life.  I could see how hard it was for him when people mistook him for a girl and to accept that Baz wanted him, I mean really wanted him.  I loved seeing both Baz and Terry get the relationship they both wanted and needed in the end and I was glad to see them slowly taking more steps to be together longer.

Cover art by Natasha Snow is a wonderful picture.