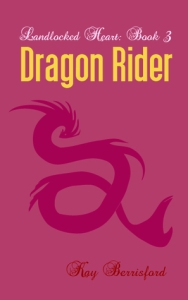 The road to Ben and Lyle’s wedding is proving a bumpy one. Ben hasn’t even told his family he’s getting hitched to a shapeshifting merman, and he’s not the only one worried. When Lyle’s tearaway sister, Cully, whisks Lyle away on the merfolk equivalent of a stag do, she questions whether marriage is what Lyle needs anyhow. A merman should roam the seas and seek adventure, not work in an ice-cream parlour and worry about the rent.

With rumours flying among merfolk that Lyle is a dragon shifter, adventure seeks out Lyle, whether he wants it or not. Cully and Ben must set their differences aside to save Lyle from a gang wishing to steal his magical powers, which are in reality waning, possibly life-threateningly so. Lyle soon realizes it’s going to take a miracle for him to make it to the wedding, forcing Ben to embrace magic and become something other an “ordinary” guy…

For a series that started out as semi-humorous in nature (at least in my perception) Landlocked Heart is taking a nicely dark and interesting turn.  It started in book 2, Lyle’s Story, where we learned about Lyle’s background, his torture, and the merfolk clan history.  Not a pleasant one at that.  Here, in Dragon Rider,  we pick up at what should be the best time of Lyle and Ben’s life, preparing for their wedding.  However, it seems to be anything but.  Ben hasn’t told his family that, ‘hey, I’m marrying a merman’.  And Cully, Lyle’s brother/sister arrives on the scene, never a good thing with Lyle’s family.

With merfolk they can choose their sex but their clan history and rulers have long taken that choice away from them until recently.  Until Lyle.   Now the ramifications and mythology are coming home to make waves for the “happy’ couple.

I love the turn of events here.  Cully especially is a figure of power and the effects of her warped upbringing.  I liked her and understood her even if I didn’t especially like her actions.  Plus you have to remember she is also non-human and has those thoughts going on inside her head layered over with their joint abused background.  Lyle too turns tragic here in ways I didn’t expect as did Ben.  The growth among the characters and plot is doubly highlighted when you think back to the first story in the series.  The hints and clues the author’s dropping just ratchets up the anticipation for the next story in the series.

In fact, with all the new information and mythology added here, Dragon Rider could easily have been twice it’s length.  It opened up so many new questions for me that I need answers for.  I can only hope the next stories in the series continue to enlarge the universe that Kay Berrisford is building while bringing more layers, more to the new relationship dynamics she has started here.  She has me really hooked!  If you are a lover of fantasy, this is a series you will want to grab up!

Cover art by Jasmine Ang continues the simple design that brands all three stories while giving you hints as to the storyline.  Still not a fan.