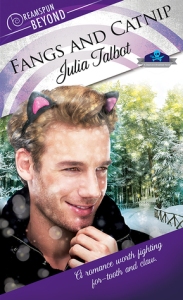 A romance worth fighting for—tooth and claw.
Solitary vampire Fallon Underwood gets all the social interaction he needs being the silent partner at the Dead and Breakfast B and B high in the Colorado mountains. Change is hard for Fallon, so when his business partner, Tanner, suggests hiring a new manager for the inn, he’s adamant that they don’t need help, especially not in the form of bouncy werecat Carter Hughes.
Carter is a happy-go-lucky kitty, and he loves the hospitality industry, so the D and B ought to be a great place for him. He falls for Fallon as soon as he picks up one of Fallon’s novels, and begins to woo the vamp with gifts. When Fallon finally succumbs to Carter’s feline charms, the results are unexpected, to say the least. Their mating will have irreversible consequences—for their bodies and their hearts.
This was a pretty cute story about a cross species mating and I really liked it.  Carter is just starting his first job since finished college, he can’t help but be drawn to Fallon.  Fallon has spent so much time alone he has trouble understanding why he feels like he needs to be around Carter so much.
Carter is so bouncy and I think it is adorable.  Fallon likes to make everyone think he is the typical broody vampire but there are a few he has allowed close enough to let them see the real him.
This story is told from both of the characters’ point of view and it make it easier to understand their thoughts and feelings.  It seemed odd that neither of them really knew anything about mating and how to deal with the problems it caused.  I could feel how heartbroken Carter felt when Fallon pushed him away even though he thought he was doing what was best.  These characters seemed ruled by their other half’s baser instincts than many I usually read about, but it worked well.  The only thing I had trouble keeping up with was the timeline, it all seemed to happen really fast but it would be talked about as having taken time.
Cover art by Aaron Anderson is great and I love the picture.
Sales Links: Dreamspinner Press | Amazon |
Book Details:
ebook, 220 pages
Published: December 1, 2017 by Dreamspinner Press
ISBN-13: 978-1-63533-977-2
Edition Language: English
Series: A Dead and Breakfast Novel, Dreamsun Beyond