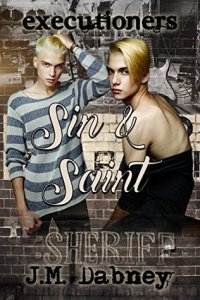 Eric and Ellison Gant better known as Sin and Saint were opposite sides of the same coin. They epitomized the nicknames given to them by their friends in the band Executioners. One thing Sin and Saint did well was fight and being inseparable means they have a lot of disagreements, but one thing they agree on is Sheriff Camden Pelter was theirs. The older, stoic man didn’t agree, yet they were determined to change his mind.

Camden Pelter had the daunting job of turning the Powers Sheriff Department around. The residents of the Georgia town didn’t have much faith or respect in the Deputies serving them. That’s where he came in and he was determined to do his job. That was easier said than done with two annoying brothers Sin and Saint who dogged his every step. No way in hell was he getting mixed up in the chaos that were the Gant Twins. Now if only if he could get them to listen and realize they didn’t have a chance of changing his mind.

Since the first mention of Camden Pelter and the twins, I (and tons of other fans of J.M. Dabney) have been waiting for this book.  Through story after story, Sin and Saint (Eric and Ellison Gant) have been chasing the older, gorgeous Sheriff of Powers, Georgia only to be rebuffed time and again.  Still, we knew that Camden would eventually come to the realization that the twins were his and we’d get that story.

And it would be full of sizzle and probably some kink.

However, I wasn’t expecting some terrific suspense scenes, high action, and some real twists to come our way as well.  Sin & Saint (Executioners #4) by J.M. Dabney delivers with a pack, a punch, and a high note on every level as the last story in the Executioners series.

For one thing, we now get up close to the twins.  The author delivers more nuanced characterizations with Eric (Sin) and Ellison (Saint), two who may look identical to those who don’t know them but who’s differences extend from the emotional to physical variations that have had an huge impact on one of them.  Past histories too that have done the same.  Camden Pelter comes in for close inspection in every way as well, from his background and local familial ties to his sexuality…his need to dominate and take care of those he loves.

Then all three men are pulled gently together to form a loving triad quite unlike any of the triads already in existence in the connected series.  It’s a slow, hot pace that should leaving you with a need for a fan.

However, Sin and Saint is not just about romance but also the need to tie up some loose ends with regard to the last corrupt  Sheriff and his organization.  In comes the high action, suspense, and some great twists in the narrative that I just adored.  Truly I love it when my expectations are overturned and the plot takes a turn I didn’t expect all of which happened here.

It ends as it should and I was hopelessly overjoyed and looking forward to the beginning of the new  series.  That would be the Trenton Security series, although I’m not yet sure that’s the name.  It will involve the guys in the Trenton group that we’ve meet before and were heavily involved here in this story.  And yes, I can’t wait!

So another great series, Executioners comes to an end with Sin & Saint but what an ending it was!  A great storyline, a long anticipated romance and triad coupling (can that be with three), and just some wonderful writing that drove this narrative crazily along to an ending that was exactly what I hoped for.   All that and more is why I’m highly recommending this story  and all the books in the Executioners series by J.M. Dabney.

If you haven’t met her glorious bunch of huge, damaged, sometimes violent men and the ones that love them, there’s no better series to start with that this one.  But now you have three series to read before the fourth series start, grab them all up and get reading! I have the list below for you all to check out.