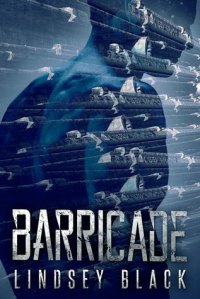 The Barricade is all that separates the Northern Russian Empire from what remains of the world’s plague-decimated population. Snaking 8921 kilometres across Eurasia, the Barricade is crafted from the New World’s nanotechnologies. Breathing, thinking, constantly regenerating, it sustains those charged with defending its districts from those desperate to find refuge in the north.

Atop the battlements of District 666, Sasha Stepanova and his team ruthlessly suppress heavy insurgencies, but at a cost. With the loss of one of his men, Sasha feels isolated and adrift. The bitter snows are a harbinger of winter’s early arrival and the town on his southern perimeter is swelling with foreboding shadows.

Transferred from a black operations testing facility, Jett Ioane is not the replacement Sasha is expecting. He’s short, sheltered and untested in battle—a poor replacement for the friend Sasha has lost. But Sasha finds him impossibly alluring. A lifetime of alienation and scrutiny has hardened Jett to the friendship and camaraderie necessary for survival. Struggling to find his feet while Sasha sweeps them out from under him, Jett hesitates to entrust the team with his truth.

Will Jett’s secrets be the key to their salvation, or annihilation?

It’s no big secret that I love Science Fiction and Post Apocalyptic books. But I usually also avoid books that are set somewhere really cold. However, the blurb for “Barricade” just sounded too good to ignore. And I’m glad I decided to read this unusual book.

I’ve read countless books that are set in a post apocalyptic world and almost all of them are set in the United States or whatever’s left of them. It seems you need to live in North America to have any chance at surviving the apocalypse. So “Barricade” was a very interesting change of the usual setting. This time, the Russians are the survivors. They built this ginarmous wall, called the Barricade, to keep out all those people who suffer from the plague. I really enjoyed the setting, even though it’s not what I usually prefer.  I could easily imagine the cold and wet and general nastiness of it. It was very well written and diverse, even though we don’t see much of the world other than the Barricade.

I really liked both Sasha and Jett. I liked their relationship and how they behaved around each other. Every character has their own, distinctive voice, even the minor characters. I loved the whole team of District 666 and their interactions. It was also really interesting to see how each tower’s team worked and how different they all were, even though they all lived basically the same life.

The romance and non-romance parts of the plot very well balanced. The love story worked really well with the rest of the plot.

There were quite a few surprises and unexpected plot twists that made it nearly impossible for me to put the book down. I finished it within a couple of days. I would’ve finished it in a single sitting, if not for work interfering. It was all so fascinating and addicting and I really loved the whole story.

As much as I enjoyed the story itself, I was really annoyed with the editing. There were so many spelling mistakes and it was really distracting. I absolutely hate sloppy editing and there just is no excuse for it. If an author expects me to pay money for their book, then I expect them to the very best to make it perfect. I can forgive the occasional typo, but I have a very low tolerance for bad spelling. The author kept switching between “Sasha” and “Sacha”. Spelling your protagonist’s name wrong is a huge no go and it made me really mad. If not for the sloppy editing, I would’ve happily given this book 4.5 stars. But this really took away from my reading experience.

The ending was a bit sudden and kind of left me with the hope for a sequel.

If you’re into post-apocalyptic stories with some romance to spice things up, I think you will enjoy this book. As long as you don’t let yourself get distracted by the sloppy editing.

Cover art by Natasha Snow: The cover looks a little bit generic. I don’t think it really fits the story. The naked guy makes you expect a way steamier story, with a lot less plot. It just doesn’t do this book justice.