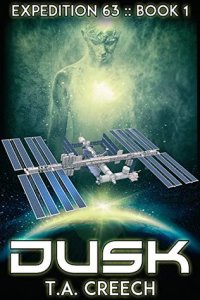 When contact is lost with Mission Control, Commander John Dennington isn’t overly concerned. Such hiccups in communication are common. The first inkling of the larger problem occurs when he sees the very shape of the world change before his eyes.

John must ease his crew into a new mission and keep the Station together by any means necessary. The crew jeopardizes their chances by fighting his orders, but Jason Weiss, his mission specialist and the light of his life, makes John’s situation more bearable.

The smallest malfunction to Station or crew would spell the end for six astronauts trapped high above a ruined Earth. It’s their mission to carry on. Random chance of the universe hasn’t operated in their favor so far, but John is determined to see them all safely home.

I’ve read plenty of books set in space but I’ve never read one that’s set on a space station in this day. I think it makes for a very interesting setting.

The blurb made me expect lots of action and suspense. It’s the end of the world, after all! But the plot is very slow to unfold and not all that much actually happens. There was one suspense-filled scene toward the end, but that’s about it.

I really enjoyed that scene but I did wish for some more action and a little more detail. We never really get to see how the six of them make this mess work. There’s quite a big time skip, so we are presented with the final solution very soon.

I didn’t expect a lot of romance from this book. And there wasn’t. That was mostly fine by me, though I would have liked a little more detail again. How John and Jason met, how they came to love each other, how they spent their lives before they went to the space station.

Having said all that, “Dusk” did have a certain kind of pull. It was quietly addicting and I found it very hard to put down. It was a very fast read and I quite enjoyed it. I was sad that it ended so soon.

If you find yourself between two books and need a quick read, “Dusk” might just be the book for you. If, however, you want an action-packed romance with lots of world building, you will probably be disappointed.

Usually, I don’t read sequels of a book that I’ve given less than 4 stars. There are too many potentially brilliant books out there to spend time on a book I’m pretty sure will only be average. However, I do want to find out how this whole mess ends, so I’m definitely interested in the next part. I think this has potential to be really awesome.

The cover is a bit of a mixed bag for me. I do like the general look of it and the colours are really pretty, but I’m not so fond of that man in the stars hovering behind the space station. I think it would look better without him.