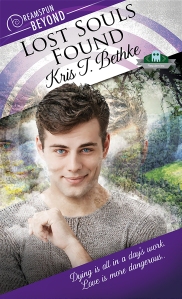 Dying is all in a day’s work. Love is more dangerous.

Ghostwalker Sam Jones has been half in love with Michael King since he started working at Requiem Inc. But Michael is his boss and a Guardian, to boot. Sam thinks they could make it work anyway, but Michael uses his position and his age to keep Sam at arm’s length.

When Sam continues to volunteer for the most dangerous cases, Michael has to intervene. He tells himself he’s just doing his job, but he’s always seen Sam as more than another operative, and he can’t bear the thought of not taking his chance. The connection between them has been strong from the beginning, and Michael’s telepathy adds unexpected depth and an edge to their new romance, but working together while they try to build their relationship might be the hardest part of their job if they don’t make some sacrifices.

I have been excited to read about Sam and Michael since I read the last book and it didn’t disappoint.  Sam has been pining for Michael since they first met ten years ago but Michael finally crosses a line and Sam decides to take the step to separate them.  That’s just the step that pushes Michael to actually talk to Sam about his feelings and see that future may be possible for them.

Michael continues to break Sam’s heart every time he denies their connection but it’s just that unfortunate thing to finally push Sam too far and for Michael to open his eyes.  Michael needs to take care of Sam and even with good intentions it bleeds into their work life.  There is a solution coming but will it be too much of a sacrifice for one of them to make?

We don’t get to see how these two have interacted in the past but seeing them in the previous book helps with that along with seeing both of their points of view.  I loved seeing Sam find the support he has always wanted from Michael which gives them both the type of connection they have longed for.  Michael has been hesitant and has trouble not being able to take care of Sam in all ways and causes some tension when bringing Sam back to life.  I see the next story is going to be about Avery who we got to know in the first story and can’t wait to see him find love again and see a potential for Tyler to be a focus in the future too.

The cover art by Aaron Anderson is great and I love the visual of Sam how it follows the same style as the first book.