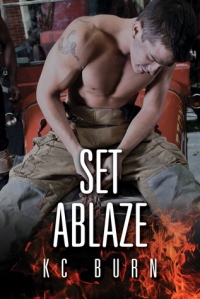 California firefighter Hayden Hurst is starting to realize there’s more to life than fighting fires and drinking with his buddies. He has room in his home and his life for someone special, but no one has stood out among his hookups. And while he’s out at work, admitting he’s gay is very different from showing up at social functions with a man. He’s afraid that’ll be too much for his less-than-accepting “friends.”

Broadway dancer Jez Bouchet hasn’t been mistaken for straight since he was gay-bashed at seventeen. After getting a lucrative job offer in Hollywood, he uproots his life in New York and drives to Los Angeles. His brother, who is Hayden’s best friend, arranges for him to crash at Hayden’s place.

The attraction between Hayden and Jez is unexpected but fiery, and they succumb before they’re even sure they like each other. But Jez hates Hayden’s homophobic friends, and Hayden knows Jez is too flamboyant for him to fly under the radar. Then there’s the complication of Jez’s brother.

Despite those hurdles, they fling themselves into a relationship. But Jez has secrets: a tiny spoiled dog and a determined stalker. If he doesn’t come clean, he might torch their burgeoning relationship before it has a chance to bloom.

This was a good story that touched on some hard topics.  Hayden is out but doesn’t “throw” his gayness in his friends’ faces and just tries to ignore the comments, when Jez comes into his life it gives him a different perspective on how they have been treating him.  Jez has dealt with a lot and most of it without anyone around to help him and he’s afraid to accept the safety that Hayden’s presence seems to give him.

Watching Hayden interact with his “friends” was rough, he would internally wince but not acknowledge anything they said.  It really took Jez opening his eyes for him to see what was going on.  I loved the heart to heart that Jez and Hayden had with Jez’s brother that really cleared the air about a lot of things for all of them, they all let so many assumptions be made it was unbelievable.

I really liked getting to know these characters but they had a really rough time getting their relationship going and then it was mostly smooth sailing.  Seeing Hayden second guess everything was hard, he has never been in a relationship on top of never really being open with someone and he didn’t know what to do.  Jez is more of an “I won’t accept any less” kind of guy but is able to bend a little once he knows what’s going on.  I didn’t really feel like I connected with these characters but still enjoyed reading about them.

The cover art by Jennifer Vance is nice and gives us a great visual of Hayden but doesn’t really connect with the story to me.