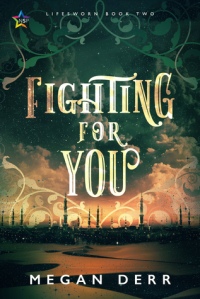 All Penli wants to be is left alone. After nearly a decade of blood, violent soldiering, and a lifetime of enduring his cold, ambitious family, it’s almost a relief to be practically alone in the middle of a desert kingdom with no way to return home because of the warrant out for his arrest.

The very last thing he needs is to be consumed by a fit of honor and nobility—but he would much rather die than ever see the two sweet, intriguing men who cross his path forced apart, one to be thrown to the streets, the other to marry a malicious bully Penli has despised for years.

Though he means only to free them, having no desire to marry after barely escaping one unwanted marriage, with each passing day Penli fears the only thing more difficult than throwing his life away will be resisting the urge to build a new one with two men he barely knows.

Fighting for You is the second book in the Lifesworn series but is one of those rare stories that is better than the first one. Perhaps because the reader is already familiar with the world-build, the characters, and the culture. With all that information already in-store, it’s easy to get swept away by great characters and an interesting triad.

I did return and read the blurb after reading the prologue. For a moment, I thought it was going to be an enemies-to-lovers story. But that’s my fault because I have read what the book was about a while back and didn’t check again before I start reading. This didn’t take from the story but it gets it more interesting with the introduction to a strong anti-hero.

As you can deduct by now, the characters are the strongest part of this story. Each of them has a personality to go with their backstory and are enough to carry the plot. I was fascinated by Penli and even when we didn’t get much about his two partners they showed the levity he needed.

This story is more about what you will do for love than a romance. We get to experience Penli discovering his need for company and how he fell in love with every challenge. The rest of the characters make the book shine and it’s nice to see the previous triad once more.

Definitely, a quick read for fans of fantasy stories and polyamorous relationships. Worth reading.

The cover by Natasha Snow has a similar format with a different color and anchor picture than the first book in the series. Pretty but it doesn’t provide much information about the story.

Series: Lifesworn
Book #1: Waiting For You
Book #2: Fighting for You