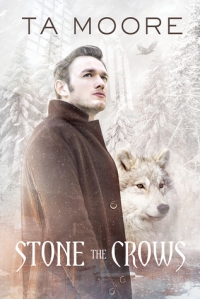 When the Winter arrives, the Wolves will come down over the walls and eat little boys in their beds.

Doctor Nicholas Blake might still be afraid of the dark, but the monsters his grandmother tormented him with as a child aren’t real.

Or so he thought…until the sea freezes, the country grinds to a halt under the snow, and he finds a half-dead man bleeding out while a dead woman watches. Now his nightmares impinge on his waking life, and the only one who knows what’s going on is his unexpected patient.

For Gregor it’s simple. The treacherous prophets mutilated him and stole his brother Jack, and he’s going to kill them for it. Without his wolf, it might be difficult, but he’ll be damned if anyone else gets to kill Jack—even if he has to enlist the help of his distractingly attractive, but very human, doctor.

Except maybe the prophets want something worse than death, and maybe Nick is less human than Gregor believes. As the dead gather and the old stories come true, the two men will need each other if they’re going to rescue Jack and stop the prophets’ plan to loose something more terrible than the wolf winter.

Imagine being dumped into a landscape where all your childhood nightmares are real, where the bedtime stories of monsters  with claws to rend your flesh and teeth to eat you told by your gran were not just nasty tales but of horrible tattered together creatures waiting for you to arrive?  This is but the beginning of an incredible story and the second book in an amazing series by T.A. Moore.

Stone the Crows  is the second novel in the Wolf Winter series by T.A. Moore and its a stunner at every level and element.  Horror, urban fantasy, and romance.  There is nothing this author and book doesn’t excel at.

It starts from the beginning, a bleak winter landscape and an isolated compound.  It’s full of dead people.  And that’s where we meet both Dr. Nicholas Blake, cataloging the dead, and the soon to arrive Gregor, werewolf, (twin brother to Jack, and one of the Crown Prince Pup of the Numitor).  The author immediately surrounds us with the horrors of a plague like illness and a catastrophic winter that’s overtaken the population.  Only we see the intimate results on the villagers nearby.  The families and their children.  It’s heartbreaking and ominous, setting the tone for all that follows.

Moore seamlessly blends the Norse mythology with the horrors of the supernatural to create something sublime.  His wolves, his dogs, (they are different), are fully non-human.  Not human characters given a light fur coating and called were.  No, they have the “feel” of something feral and wild. And that contrasted with Nick’s humanity, makes the difference all too apparent. As will all the horrors that follow.

When legends and mythology collide, when blood and revenge are tied together, and a Throne involved, well, as it’s already been proven, there is nothing no one will sacrifice to achieve one’s goals, no amounts of blood, no great number of people, wolf or human that can’t be killed and Moore understands the emotions behind it all.  On both the grand scale and the small emotional, intimate one.  That last one that will leave you  sobbing in scenes here. Trust me…keep those tissue boxes handy.

This is a bleak, gritty, moving story. It’s epic fantasy  It’s full of muddy, emotional complications, and an overall series arc that starts back in book one, Dog Days (Wolf Winter #1).  It’s got a ways to go before its highly involved, convoluted tales  plays out.  So much more blood to be spilled, and I expect the price to be paid equally high.  I’m both dreading and highly anticipating the next story.

You con’t have to have read the first one but why wouldn’t you?  It’s equally incredible and give’s you Jack’s story.  This is a beautifully written story and series.  It has amazing depth, and continues to grow as more elements are revealed in detail.  Again, it’s a stunning story.  Don’t pass it up.  I highly recommend it.

Cover Artist: Bree Archer.  I like the cover but it’s too white (i can’t believe I’m saying this. Doesn’t convey the  darkness of the story).