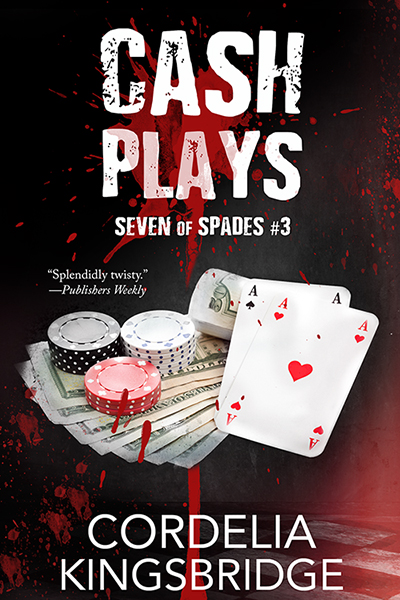 Scattered Thoughts and Rogue Words is happy to host Cordelia Kingsbridge’s tour for Cash Plays.  Check out the details below and don’t forget to enter the giveaway.

Thanks for checking out the blog tour for Cash Plays, the third book in the Seven of Spades series!

After the Seven of Spades returns at the end of Trick Roller, they resume their vigilante mission with a vengeance. Levi and Dominic do their best to keep up, but a bloodthirsty serial killer isn’t the only threat they face…

In this game, the stakes are life or death.

The Seven of Spades is back with a vengeance—the vigilante serial killer has resumed their murderous crusade, eluding the police at every turn. But a bloodthirsty killer isn’t the only threat facing Sin City. A devious saboteur is wreaking havoc in Las Vegas’s criminal underworld, and the entire city seems to be barreling toward an all-out gang war.

As Detective Levi Abrams is pushed ever closer to his breaking point, his control over his dangerous rage slips further every day. His relationship with PI Dominic Russo should be a source of comfort, but Dominic is secretly locked in his own downward spiral, confronting a nightmare he can’t bear to reveal.

Las Vegas is floundering. Levi and Dominic’s bond is cracking along the seams. And the Seven of Spades is still playing to win. How many bad hands can Levi and Dominic survive before it’s game over? 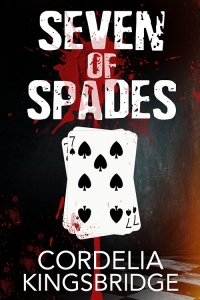 About the Seven of Spades Series

Las Vegas has never seen a serial killer like the Seven of Spades.

The self-styled vigilante is on a mission to cut down the wicked and treacherous, and Sin City has no shortage of targets for their bloody wrath. What happens in Vegas . . . ends with the Seven of Spades’s calling card on a grisly corpse.

Standing against the killer are Levi Abrams, a dedicated homicide detective locked in a constant struggle to restrain his own dark side, and bounty hunter Dominic Russo, a charming rogue with a heavy secret weighing on his shoulders.

The hunt for the Seven of Spades sends Levi and Dominic on a collision course, igniting a passionate relationship forged in conflict and sealed with blood. Together they’re stronger than the sum of their parts, but a wily, elusive serial killer isn’t the only threat that will strain their bond to the breaking point.

Ante up, because the Seven of Spades is all in. Are you?

Cordelia Kingsbridge has a master’s degree in social work from the University of Pittsburgh, but quickly discovered that direct practice in the field was not for her. Having written novels as a hobby throughout graduate school, she decided to turn her focus to writing as a full-time career. Now she explores her fascination with human behavior, motivation, and psychopathology through fiction. Her weaknesses include opposites-attract pairings and snarky banter.

Away from her desk, Cordelia is a fitness fanatic, and can be found strength training, cycling, and practicing Krav Maga. She lives in South Florida but spends most of her time indoors with the air conditioning on full blast!

To celebrate the release of Cash Plays, Cordelia is giving away a $15 Riptide credit! Leave a comment with your contact info to enter the contest. Entries close at midnight, Eastern time, on June 9, 2018. Contest is NOT restricted to U.S. entries. Thanks for following along, and don’t forget to leave your contact info!

7 thoughts on “In Our Spotlight: Cash Plays (Seven of Spades #3) by Cordelia Kingsbridge (giveaway)”