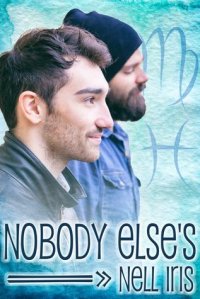 Beckett’s best friend, Matt, comes from a big family.  As in, a really big one with eleven children.  Matt is the oldest and his younger brother, Levi, is three years his junior.  Levi is also the focus of Beckett’s crush. “I’d had a crush on him for years, but he was Matt’s little brother, and besides…what would he see in someone like me?”  Beckett is a bit of a bear, hairy with a chubby belly.  When he sees Levi, he “…pulled in my stomach and sat a little straighter.  Not that it helped.  My belly couldn’t be hidden.”

In a family of loud people, Levi is the exception.  While everyone else is yelling over each other to be heard, he is quiet.  He is a tech wizard, nearly dropping out of high school to open his business (though parents put the stop to that).  His business is very successful and he lives in an apartment over the garage at his parent’s, helping out financially and with the siblings, particularly the Hell Sisters, twins age 5.

The story is told in back and forth first person point of view from both Levi and Beckett.  This is something I always appreciate as I like to know the why of what each person does, says and how they react.  It begins with Matt and Beckett meeting for a meal and Beckett is surprised by the arrival of Levi.  I was a little surprised at Matt’s behavior – when Beckett reads a horoscope (which is racy, gay and funny) from a website, Matt is shocked.  “It’s a site for gay people.”  Because Beckett is bisexual and his last partner was female, Matt thought, well now he’s straight.  Which is sad considering Levi is gay, but they call him out on it.

I loved reading the horoscopes, one for each chapter.  First it was surprising and then they were funny.  You can see where it’s going early but that didn’t detract from them at all. That’s the kind of horoscope I would read!

The story is sweet with very little angst, if any.  Beckett is a serious Harry Potter fan, which I enjoyed, being one myself.  Beckett is an accountant and offers to help Levi with his business accounting and that’s how the courtship begins.

“Levi: Why would you offer something that valuable to me?

Beckett: Because you always help everyone else. It’s time someone has your back.”

Like I said, sweet.  There is quite often mentioning of how each thinks the other is so cute and so kind.   I liked that when Levi talks to Matt about asking Beckett out, Matt gives the “don’t hurt my friend” speech to Levi, rather than to Beckett about Levi.  Their first date is an amazing one and shows how much Levi understands Beckett.

The book is very relationship focused, with little outside plot. We get insights into both Levi’s and Beckett’s families.  I liked this book but be warned that at times it is very sugary.

Cover art, depicting both Levi and Beckett, was pretty close to what I imagined they would look like.