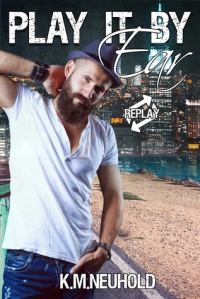 This is the second book in the Replay series which tells the stories of the members of Downward Spiral, an epically professionally successful band where the members are falling apart.  Or at least, the band is on the verge of falling apart because of some of the members.  This one tells the story of Lando, who in the first book was a rock, a support of the other band members.  At the end of book one, Face the Music, there was a very clever set up for the books to come and I was very happy that Lando was next.

Lando was supposed to be one of two of the song writers for the band but in reality he has been doing it all.  From trying to keep Lincoln from hurting himself and keep Jude from self destructing to being responsible for all the song writing and it has taken a toll on him.  “I feel wrung out physically and emotionally.  I’m a battery with only ten present life left and no charger in sight.”

When their manager, Archer, suggests everyone take a vacation after the tour has to be canceled, Lando packs up and heads to Florida.  Nine years ago he had a weekend in Florida with someone he fell in love with.  He gave his phone number and they promised to keep in touch but it never happened. So for the past nine years the songs he’s written have been about Dawson, his muse and his long lost should have been.  “I”ve written a dozen songs about him. I’ve stayed up nights thinking about him. I’ve gotten drunk and cried over him. I hardly know him, but in nine years, I haven’t been able to shake him.” He is thinking maybe he will see Dawson there, even if he isn’t totally hopeful.  “Maybe there’s something wrong with me. Surely it can’t be normal after nine years to still want him so much.”  But he has his grandfather’s story of knowing immediately upon meeting her who he would marry to make him think love at first weekend is possible.

Except, lo and behold, Dawson is also taking vacation at the same time and he does run into Lando. This meeting was a little coincidental but I was okay with.  The problem? Dawson had an accident nine years ago and lost not only his hearing but also his memories.  While Dawson has had a serious crush on Lando as the bass player for Downward Spiral, he doesn’t remember spending the weekend with Lando, the man.  Dawson is a writer who’s words have deserted him and he’s now working as a bartender, sort of just existing.  He was this fearless man before and things have changed.  He has the support of his wonderful sister, Parker, but that is sort of it.

The book is told in first person point of view, alternating Lando and Dawson.  In addition, it has flashbacks from nine years ago and today, cleverly titled Track, Side A or B.  While I used to dislike first person, it has definitely grown on me because now I like getting into the mind of each character.  Here in particular it’s helpful because Dawson is deaf and he does have memory gaps, so understanding where he is coming from was beneficial.  It is a little heartbreaking when you realize that he puts everything into his calendar because he is terrified of forgetting.  “Most days, the fear of forgetting something is worse than the actual forgetting.”  He puts in what he did that day just to make sure he remembers.

When they run into each other at a bar in Florida Lando is overjoyed and then shocked when he find that Dawson, the man he’s dreamed of for years, doesn’t remember him at all.  “He doesn’t recognize me. I’ve been obsessing over im for nine years, and he doesn’t even remember me. Could I be any more pathetic?”  It was a hard moment.  “I’ve spent all these years falling in love with the memory of a man who doesn’t exist anymore.”

But then he’s happy to get to know this new Dawson, who is a big fan even if he can’t remember what the songs sound like.  And while he thinks Cherry Lane (the song Lincoln wrote about Jace) is “….okay, but the rest of the album is much ….more.  They’re poetic and captivating. They’re original and beautiful.”  So he loves the songs that Lando wrote, and happen to be the songs Lando wrote about him.

Lando does convince Dawson to spend some time with him and they work on getting to know each other again, this time with text messages and notepads instead of conversation with some bittersweet moments when Lando knows things about Dawson that Dawson can’t remember.  Lando is so sweet, trying to learn ASL so he can communicate better.  He is not the spoiled selfish rock star that you would expect.  He is kind and gentle.  This book is definitely softer than book one, because Lando is softer than Lincoln and it comes across.

They have obstacles to overcome, including paparazzi, a lost phone, trying to reconcile the past with the now and trying to get past the writer’s block they both seem to have.  Lando hasn’t been able to write any songs, Dawson hasn’t been able to write any stories.   Lando’s advice was so apt: “instead of trying to write a book that will change the world, let yourself try to write a book that will change one single person’s world.”   We get to see Dawson try to find that fearless man he used to be and you just know how difficult that is.  “Can I be brave again? Is that still in me?”

Dawson has some great insights into Lando. “I wonder if he ever does things because they’re what he wants the most, instead of what makes everyone around him happiest.”  That sums up Lando well and he deserves to be happy himself.  There are a few times that Dawson doesn’t react well to things Lando reveals but you have to give him that – for Lando it’s been nine years of longing whereas for Dawson it’s really the first time he’s with this man.

Archer, the manager, is so amazing and takes care of so much I was really looking forward to his book.  Unfortunately, from the teasers in this book I have a feeling his is going to take a turn towards a theme I don’t care for so I may have to skip it.  I will be bummed if so.

I liked the first book and I loved this one.  There was just something about it that grabbed my heart and held on.  I wanted so much for these guys.  Even more, I was so happy that there was no magical fix of Dawson’s loss of hearing because in the real world it doesn’t work like that.  Lando was in love with the man, unconditionally.  Just what we all should have.

The cover art by Inked Design depicts Lando with the city in the background and the beach in the foreground.  I found it very fitting and both books in the series have covers that show the band member almost exactly as I pictured them.

Play it by Ear