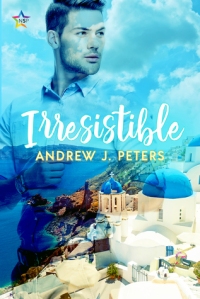 What if the gods created a man so beautiful, he was irresistible to anyone?

Brendan Thackeray-Prentiss is an Ivy League-educated trust-funder who Gotham Magazine named the most eligible gay bachelor in New York City. He lives for finding his soulmate, but after walking in on his boyfriend of three transcendent months soaping up in the shower with an older female publicist, he’s on a steady diet of scotch, benzodiazepines, and compulsive yoga. Men are completely off the menu.

Callisthenes Panagopoulos has a problem most guys dream of. With the body and face of a European soccer heartthrob, the vigorous blond hair of a Mormon missionary, and a smile that makes traffic cops stuff their ticket books back in their utility belts, he’s irresistible to everyone. But being a constant guy-magnet comes with its discontents, like an ex-boyfriend who tried to drive his Smart car through Cal’s front door. It makes him wonder if he’s been cursed when it comes to love.

When Brendan and Cal meet, the attraction is meteoric, and they go from date to mates at the speed of time-lapse photography. But to stay together, they’ll have to overcome Cal’s jealous BFF, Romanian mobsters, hermit widowers, and a dictatorship on the brink of revolution during a dream wedding in the Greek isles that becomes a madcap odyssey.

A gay romantic comedy of errors based on Chariton’s Callirhoe, the world’s oldest extant romance novel.

I cannot begin to tell you how close to a one star rating this book came.  Had I written the review shortly after I finished it, it might have even garnered a zero, that’s how truly awful a mess I feel Irresistible by Andrew J Peters is.  But I  have waited until the light of day and some distance between me and it (and loads of coffee) before sitting down to right this thing.

My how that helps!

Where oh where to begin?  How about the  two main characters (of no depth and weird backgrounds) fall instantly in love and get married by page 35?  Yes indeed.  Even though one has had serious issues with a previous boyfriend with stalker issues (ongoing), an absolute nutjob of a “bestfriend” who is currently with him on vacation who’s every word and action screams sociopath,  now hooking up with a rich someone with the judgement of a kumquat? All within the first 50 pages and boom they are getting married!

If I could have, I would have stopped right there because there was nothing believable about any of them.  But no,  I said  I’d read this book.  Smh.

So prep work is ongoing for the marriage, sociopath bestie is not happy and all of a sudden in Chapter 8?  We get another pov!   Up to three now.  We are flip flopping formats and povs all over the place. Yes, the author brings in another person’s perspective because let’s crowd the field as the plot is about to take flight into whackydom with bombs, explosives, Arabs, mad Greeks, Sheiks, and you name it.  None of which, again really make any sense.

More of a hodgepodge of action elements shuffled together, thrown into a narrative pot and voila! Another chapter is born! And another and another. And so on.

I was never so happy to have made it out of a book alive.

If you are dying to read a book by Andrew J. Peters, I suggest you look elsewhere.  Truly there is nothing Irresistible about this story in my opinion.

Cover art by Natasha Snow:  Best thing about this novel.