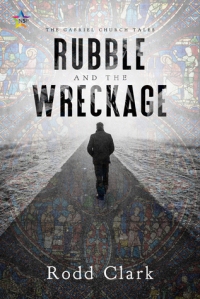 Christian Maxwell, a writer with a background in psychology, is caught up in the idea of his bestseller and already attracted, repelled, and a little excited by his subject. Gabriel Church, a killer, figures he might as well make money on his story rather than someone else, or that’s what we’re told. They both share a dark sense of humor and some methodical and obsessive traits. Gabe, of course, is thrilled with his own tale, having the attention of Christian, as well as being able to establish some sort of authority over him. Christian has put himself in a precarious legal position since Gabe hasn’t been caught yet. His obsession with news stories of murders lead him to Gabe. While someone with his research abilities and way of seeing patterns might have been a great asset to law enforcement, his loner style, lack of good judgement, and ethical flexiblity really wouldn’t be.

Here are some things that bothered me. We are basically told the author’s view of the characters, an apology (an explanation or defense), to understand how the story turns out the way it does. “We all weave the patterns of our lives by our actions, and possibly by the desires we maintain to be with others similar to ourselves.” While I find the statement profound, I feel like this should have been a preface, or even a postscript and we shouldn’t still be in this phase in chapter two. The POV (point of view), switches around all over the place. That quote is in first person plural. The author then goes back to dual third person, limited (one character’s view of another) and omniscient (a god view type of third person with facts not in evidence, or knowledge only the author would have.) This is a stylistic choice that is not my preference, but it left me feeling detached from either character, which in the case of a serial killer might be a very good thing. There were actually several typos–missing or repeated words–at regular intervals in the version I received. The story is sometimes hard to follow because it teeters between calling the killer Gabe and Church, but usually uses the writers first name. The story is at times contradictory, like how Gabe can’t see or remember a face because the white light is so bright (the man kills because of a victim’s white aura, like it is a calling from God), yet later we are told he remembers every face and will never forget.

As you would expect, the story wanders through different time periods as the killer talks about kills and his childhood based on his own agenda and the questions he is asked. He also amuses himself by drawing Christian in and using his sexuality against him. The way they dance around the issue of sex is very odd, but then everything about their interactions is odd. Gabe says he is heterosexual, while we witness Christian’s epiphany that he is gay, but that didn’t quite work for me. It seemed more like they both need a certain type of circumstance for the act to have any meaning, and this is it. I do not like the idea that meeting Christian can save or heal Gabe. There can be no redemption for this man and, no I don’t care about his crappy childhood. We are privy to his rapid changes in mood and understand he is unstable. We know he has killed at least 40 people.

No one in this book is likeable. There is no one to root for. I’m not even sure why this needed to be fiction. I can find plenty of true crime novels if I want. It is really important that after listening to details of murders all night, and having sex, they are now sightseeing and giving us a history lesson on the surrounding Seattle area? There is also a murder described from the victim’s point of view for no reason I can find. All of the sudden out of nowhere, Christian is being called Boy, feeling submissive, and Gabe calls himself Daddy. Is this a joke? “You look horny, baby. You want a ride on this love rocket”?

I am actually rather speechless. I can’t recommend this. I actually don’t care about what happens to these characters. This also needs editing. I think, at chapter fourteen, I am going to DNF.

I quite liked the cover art by Natasha Snow. It shows Gabriel on a lonely path heading towards the light, reminiscent of how he chooses his victims. The cathedral window overlay shows hints at his broken, chaotic mind and his view that he is on a mission.
Sales Links:  NineStar Press  |  Amazon
Book Details:
Kindle Edition, 2nd edition, 361 pages
Published April 30th 2018 by NineStar Press (first published January 30th 2015)
Original TitleRubble and the Wreckage
ASINB07CJZVXNS
Edition LanguageEnglish
SeriesA Gabriel Church Tale #1