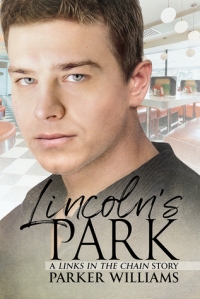 A Links In the Chain Story

Since then, he’s tried to atone for his past, including walking away from his family’s wealth. He opened a diner, hiring people to work for him that he would have spit on before his epiphany. He’s found peace, which he’s about to lose to a hazel-eyed man.

Noel Simmons wound up on the street when his parents discovered he was gay. His path leads him to Lincoln’s diner, where he asks for a job. He’s thrilled when Lincoln agrees to hire him, but finds his new boss perplexing. Can anyone be this kind and decent?

What starts out as business becomes something more. Noel discovers he needs Lincoln in order to feel safe. Lincoln needs Noel to complete him. But when Lincoln’s past gets in the way of his present, will the two have a future?

As always Parker Williams is a guarantee. As soon as I started this new release, I understood it was going to be a beautiful journey into these guys lives. Lincoln and Noel was simply amazing, together and as individuals. The strength both of them had when they took their complicated worlds and morphed into something better and filled with love, was striking. Lincoln was so brave to say no to his family’s money and start a new diner that little by little became a sort of sanctuary for people who needed to be cared or just a second chance. His big heart, more than once hurt, was still open and ready to welcome more friends. Someone like Noel was exactly who Lincoln was waiting for and when the younger man walked into his diner, Lincoln soon fell for Noel.

I loved the two main characters deeply and with no hesitation because they were pure, always positive and so open and full of love to give, it was a joy to read each new chapter. Their relationship and the ones they had created with Kate and Robert were real and perfect like every friendship or love story should be. I think all of us should deserve someone like these  guys into our lives.

Although I adored Lincoln’s Park, I admit I didn’t give it a higher rating because the last chapters, when something I can’t spoiler happened, weren’t really what I expected from this author. It was too simple, almost a cliché, resolve things with that meeting, seen too many times already in movies and books, it missed some freshness and originality.

Still, I can’t wait to read the second installment in this new series and I feel to recommend this novel and everything else the author has written.

The cover art by Reese Dante is lovely and well done but I can’t see in the model neither of the two MCs.