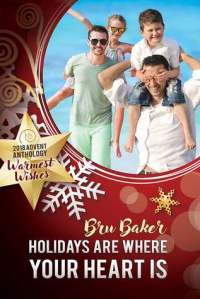 A Story from the Warmest Wishes: Dreamspinner Press 2018 Advent Calendar

Jared’s been all over the world as a traveling manny with Holiday Helpers, and the itch to put down roots is starting to eclipse his wanderlust—especially since his current family is a handful.

After culinary school, Wes did some wandering of his own, exploring Central America before settling as a resort chef in his mother’s homeland of Costa Rica, a place he loves and where he plans to stay. If he’s learned one thing, it’s to be wary of flings with vacationers. Still, he can’t stand to watch two little Swiss kids lose their belief in Saint Nicholas, so he’ll lend a hand to the manny assisting the family. It won’t be easy to recreate a traditional European Christmas in a tropical paradise.

Between a snowball fight on a sunny beach and sledding down an active volcano, Jared and Wes discover some renewed holiday magic of their own. Can they make it last a lifetime?

Holidays Are Where Your Heart Is by Bru Baker is a layered contemporary romance that left me with very mixed feelings.  On one hand I thought the character of the manny, Jared, Wes, the instructor, and the children, well done and often heartbreaking in many respects.  I loved how Jared paid close attention to his charges, their feelings, and inventively came up with ways to make them feel safe, valued, and loved enough that Santa Claus or their version of it would find them, even at a resort in Costa Rica far away from their home (and the staff there that had the children’s interests at heart).

Bru Baker did a great job with Costa Rica…mostly.  She has the children safely behind large gates at the resort, because there’s a huge disparity in economics there.  Resorts versus the shacks with galvanized tin roofs, which are mentioned (and high crime which is not). I loved the section with the volcano sledding, including the safety measures and the dangers which were included. For the most part the kids stayed safely behind the security gates to be imaginatively entertained by Jared, Wes, and others there with warmth and affection.

Which brings me to the parents, blithely vacationing away on the other side of the island, who left me (and the staff) wanting to smack them upside the head most of the time. This was “reared by manny” at its most emotionally removed and Bru Baker  makes its impact clear on these very realistic children, the staff who care for them, and yes, the readers. That the children will continue to be raised by parents who care little whether they have a wonderful or meaningful Christmas makes this a bittersweet story for me.  It left it tarnished in a way because while the joy and beauty of what Jared and Wes managed to accomplish for these young children is heartwarming, their future remains unchanged in the hands of self centered parents.  A true sour note at the end as I came to love these kids even more than the main characters and my heart broke for them.

Not the happiest of holiday readings to be sure and probably not what the author intended.

I’m sure she wanted us to focus on the romance, which is quite sweet and lovely and undermined by the storythread of what Jared and Wes did for the kids and how it all turned out.  The snow and that entire scene was my favorite by far.  Perfection.

Cover Artist: Adrian Nicholas.  Not a fan of this cover.  Could be about any story with two men and a family, not just this one.  Nothing says Costa Rica, or  Christmas or distinguishes it enough to raise it above a simple beach cover.