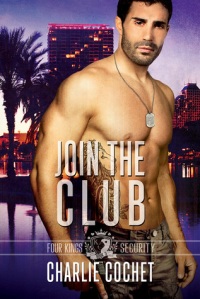 I seem to be in the minority for this series and this book.  I liked it but I wasn’t overwhelmed by it in any way. This one had a good core theme, but the romance felt so off to me. Most of the time I felt like I was watching a soap opera. Given the background of these characters, I expected men who were not demonstrative and kept emotions controlled until safe to bring them out. Maybe the men I know are not typical because they men were so OTT smoochie and the sexting and quick work breaks for sex before they had a long-term commitment were inappropriate and totally out of character with their professional roles.  They’re older guys so I would think they could better handle their sex drives.

Mason, a former Texan, kept his twang but is now a detective in Florida—at least until he fails a drug test because he neglected to list his cough meds at the time. Suspended for an unknown time (eventually 8 weeks!) he takes a job with Four Kings Security.  Mason is Ace’s former lover from book one. Lest we forget that, it’s repeated ad nauseum throughout the story by so many different characters that it became annoying. When the 18-year-old son of one of the Kings’ deceased comrades teases him about it, I threw in the towel.

Mason has had a crush on Lucky, Ace’s cousin—one of the Four Kings—since book one. I gather there was a kiss or two in either that book or the second one, but apparently these two are destined to be together because most of the book is about their budding romance, hot sex, and eventually, everlasting love.

Thankfully, the core story was good, though much of the detail was quite unbelievable. A valued detective suspended for eight weeks because of cough meds that can be proven by contacting his doctor about the prescription? That’s an extraordinary length of time. But it was necessary so that Mason could get comfortable at Kings Security and could fall in love, not just lust, with Lucky.

As with the other books, there was a lot of extraneous background information in this story. I’m used to more dialogue from this author, through which readers can follow the story and make their own decisions about characters.  But this book, and series, has page after page of narrative and repetitive information.

The crucial action toward the end has a rather mild, and unrealistic, outcome and the men find their way to their HEA.

The cover by Reese Dante features a man who must be Lucky as he has dark hair, scruffy beard, and what appear to be camo pants and dog tags. He’s handsome, and I love the bright purple big city background.