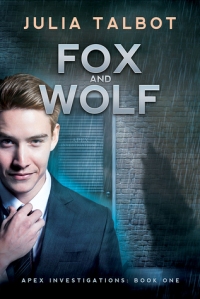 Rey, a fox shifter, is an information broker. When one of his clients gets murdered, he’s thown into intrigue he doesn’t even understand. He’s threatened, his apartment is broken into, and dire crocodile shifters are after him. I have to admit every time they were called dire crocs, my mind asked is there any other kind? Dylan is the wolf shifter at Apex Investigations assigned to his case. While Dylan and Rey fall into an easy relationship, Dylan’s boss Mike is suspicious if Rey is really an innocent victim.

This book introduced the group of misfit cats, wolves, and bears that form the “pack” of Apex Investigations with Mike as the Alpha. Brock has a past history with fox shifters and doesn’t trust them, which affects how he treats Rey. He’s also hiding some pretty big secrets from the people who supposed to be his “pack” more than colleagues. Kit, James, Carrie, and Griz are not fully fleshed out.

This is really about scent and instinct paving the way for attraction, trust, and mating. Shifters form a chemical bond that needs to be strengthened with time and intimacy for feelings to develop. This is pretty quick as Dylan and Rey seem partially bonded after a day. I don’t mind the insta-lust. I did mind that even though they are in a safe house because of the threat to Rey, they go shopping and then go back to the headquarters making themselves targets. In fact, I like forced proximity so it’s a shame they didn’t stay in the safe house and get to know each other better. One of the first problems they have is Dylan not trusting Rey’s judgment–Rey is way more forgiving than me. As soon as the crisis has past, they are back to mating to strengthen their bond. The book is fun, going from one crisis to another to move the story along, but I don’t really feel that emotionally invested–even with multiple POVs.

The cover is by Kanaxa and shows Rey with a shadow of Dylan in front of the office. I think it’s very striking and the rain made me laugh (it’s raining cats and dogs, or when it rains it pours are both true here.)